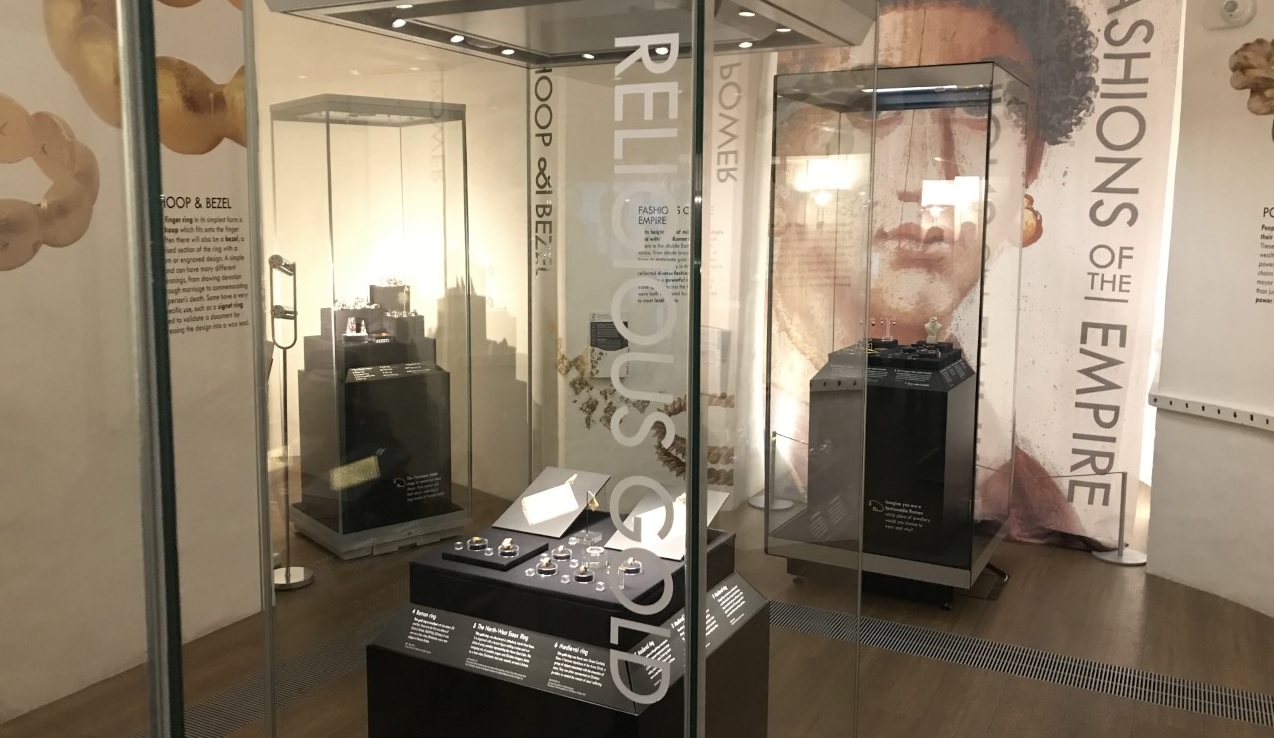 Epping Forest District Museum has built up quite a collection of medieval rings over the last few years, mostly thanks to the Treasure Act (1996). I was especially pleased when Colchester Museums asked to borrow this example to include in their exhibition Adorn: Jewellery, the Human Story, as I think this is one of the most visually powerful, and it provides a different perspective on the owner and their motives for wearing it.

The ring dates to around 1475-1525. It is cast from gold and the hoop has five circular bezels separated by oval beads. Each bezel is engraved and may originally have been decorated with enamel. The engraved symbols show the ‘Instruments of the Passion’, which were popular in medieval art, symbolising Christ’s suffering at the time of his execution.

The ten beads and bezels identify this as a ‘decade ring’, which would have been used in the same way as a rosary for personal prayer. At around the time this ring was made, devotional books described meditations associated with these ‘Instruments of the Passion’.

The symbols represent elements of the Easter story and I interpret them as follows:

Three dice. After Christ’s crucifixion, the soldiers divided his clothes between them, casting lots to decide who would take the fine cloak used to mock Jesus as ‘King of the Jews’.

The Cross, with the hammer and nails used for the act of crucifixion. A hyssop plant grows beside the cross. According to the gospel of St John, a hyssop stalk was used to raise a sponge soaked in vinegar and gall to Christ’s lips – a reference to the Old Testament (Moses told his followers to use hyssop to smear the blood of the Paschal lamb around their doors for passover), reinforcing Christ’s sacrifical role.

A pair of pincers, used to remove the nails from his ankles and wrists. A flail, used to flog Christ before his execution. 3 money-bags, representing the 30 pieces of silver Judas Iscariot received for betraying Christ.

The Sacred Heart (symbolising Christ’s redeeming love) surrounded by the crown of thorns, another prop used in the mocking of Jesus.

The central image appears to be the pillar or column, to which Jesus was tied for flogging. Two items cross in front of this, one is probably the Spear used to pierce Jesus’ side before he was brought down from the cross. The other may be St Veronica’s veil. Traditionally, St Veronica, moved with pity as Jesus passed carrying his cross to Calvary, wiped his face with her veil on which his image miraculously appeared.

The images on this ring might seem gruesome to our modern eyes, but relics (objects to remember a holy person by) had been valued since the late Roman period, and a new wave brought back from the Crusades led to an increase in their use during this period. Many religious institutions owned Holy Relics, as did some devout individuals. Illustrations may have served a similar purpose for those who were unable to acquire the ‘real thing’. Some scholars suggest that reflecting on the Passion was believed to be a form of repentance.

Although we can never know who wore this ring, the precious metal and high-quality suggest that they were wealthy and of high status. They clearly they wanted to identify themselves publicly as Christian, as rings are among the most easily visible forms of jewellery, and would have even been worn over gloves in this period.

The ring was found by a metal-detectorist, searching with the landowner’s permission, in Abridge in 2004 and was reported under the Treasure Act (1996) .We purchased it with help from the Art Fund, the V&A/MLA Purchase Grant Fund and the Headley Museums Treasure Acquisition Scheme.

More information on the Treasure Act can be found on www.finds.org.uk

The ring can be seen in Adorn: Jewellery, the Human Story at Colchester Castle Museum until 16 February 2020.