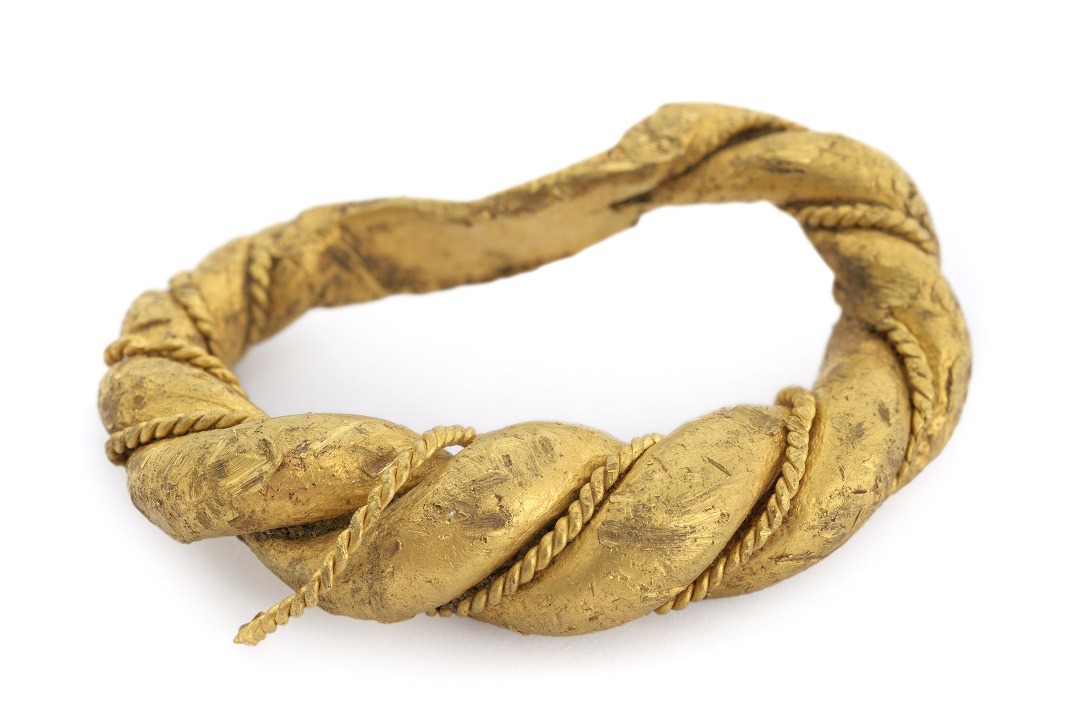 This ring was found by a metal-detectorist near Thaxted, Essex in 2013. After it was reported under the Treasure Act (1996), it was purchased for Saffron Walden Museum’s archaeology collections by Saffron Walden Museum Society Ltd, with the assistance of the Arts Council England / Victoria and Albert Museum Purchase Grant Fund and the Headley Trust. 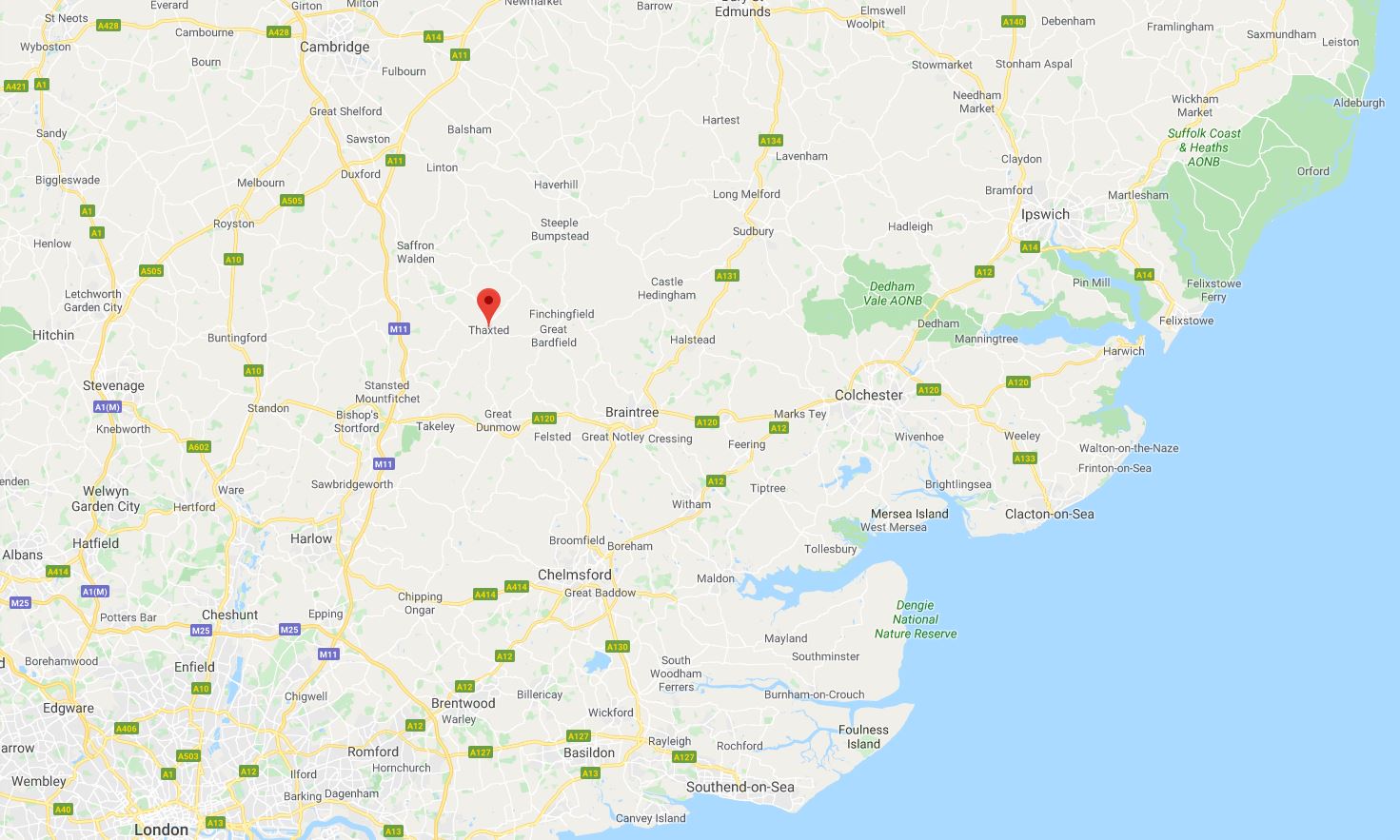 The ring was made by twisting strands of gold wire, a style associated with the Vikings – people from Scandinavian countries (Denmark, Norway, Sweden) who raided, traded and settled across northern Europe over a thousand years ago. It probably dates from around AD 900 – 1200.

The size and weight of the ring, 35mm across and weighing over 32 grams, suggest that it was most likely worn by a man. X-ray fluorescence analysis at the British Museum’s Department of Conservation and Scientific Research revealed that the metal is over 95% gold, the rest being silver and copper.

Sometimes detail can be important. The diamond-shaped plate on the back of the Thaxted ring is thought to be a Scandinavian feature, because it is also found on rings from the Viking homelands. In other words, it was probably made by a Viking goldsmith in Denmark, Norway or southern Sweden, rather than an Anglo-Saxon smith working for Vikings in eastern England.

We cannot tell who lost the ring, or why. Such objects could easily be traded or passed from one person to another. To the Vikings, such jewellery acted as portable currency and a sign of status. 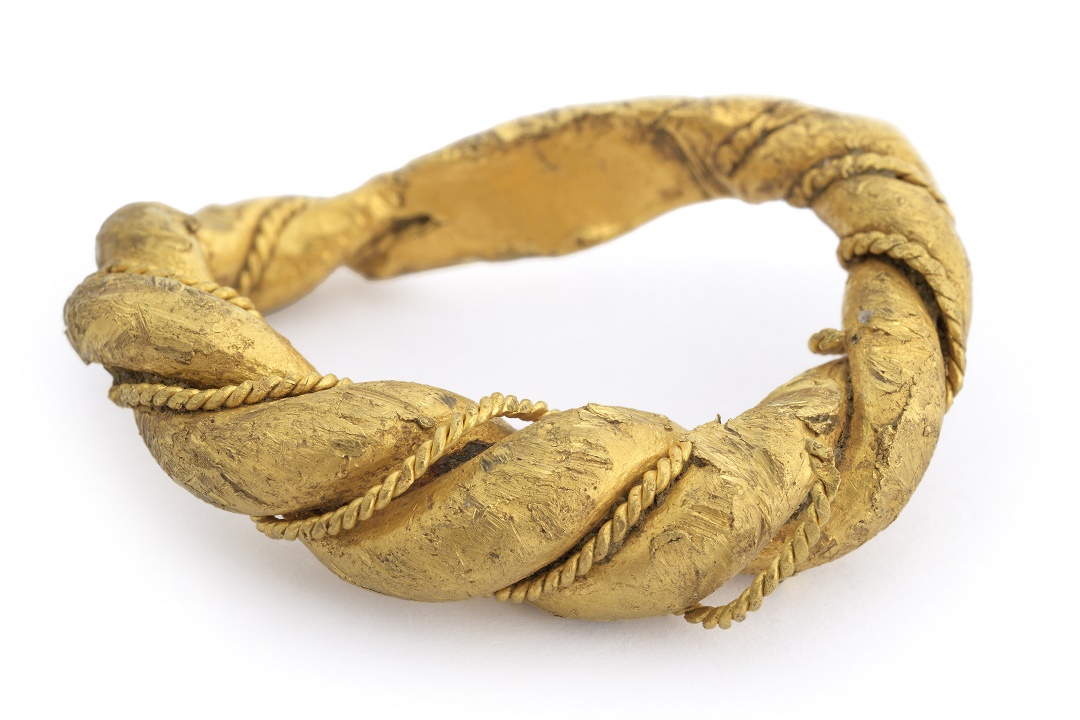 We were thrilled to acquire this ring for Saffron Walden Museum because the presence of Vikings in Essex is often hard to find in the archaeological record, but this large, showy ring brings them to life. You can imagine this worn by a Viking, and it complements the woman’s silver pendant necklace in Viking style, which was found in a burial in Saffron Walden and is also in our collections.

Loaning this ring and other objects to the Adorn exhibition gave us the opportunity to share some of our special exhibits with a wider audience. It also allowed us to see these objects in a new context, with a fabulous range of other jewellery and archaeological finds from across the county. Seeing the jewellery created by contemporary Essex jewellers made me think about the goldsmith who made our Viking ring; I wonder what they would have thought of it being in an exhibition a thousand years later?