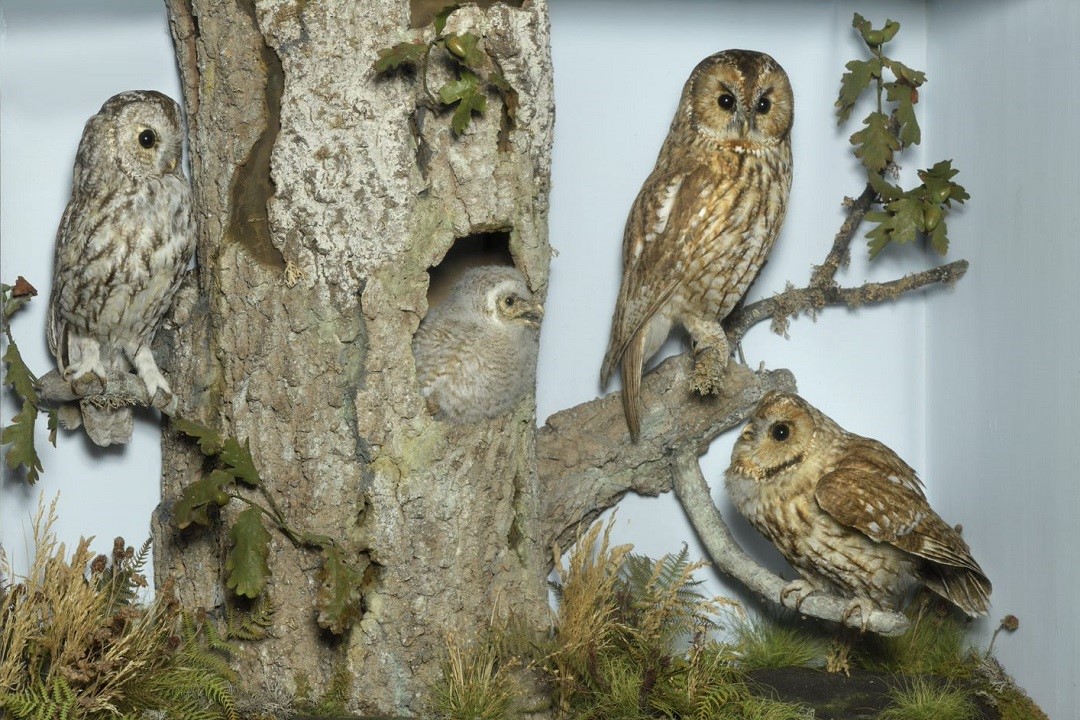 The first project I worked on, as part of a John Ellerman Foundation grant, involved researching and collating the documentation of the Ogilvie bird collection and updating its digital records. By going through the Museums archives it was possible to rediscover the stories behind the creation of some of the cases and trace their journey to Ipswich Museum.

Here are three of my favourite cases and what the letters, sketches and photographs in our archives taught me about them. 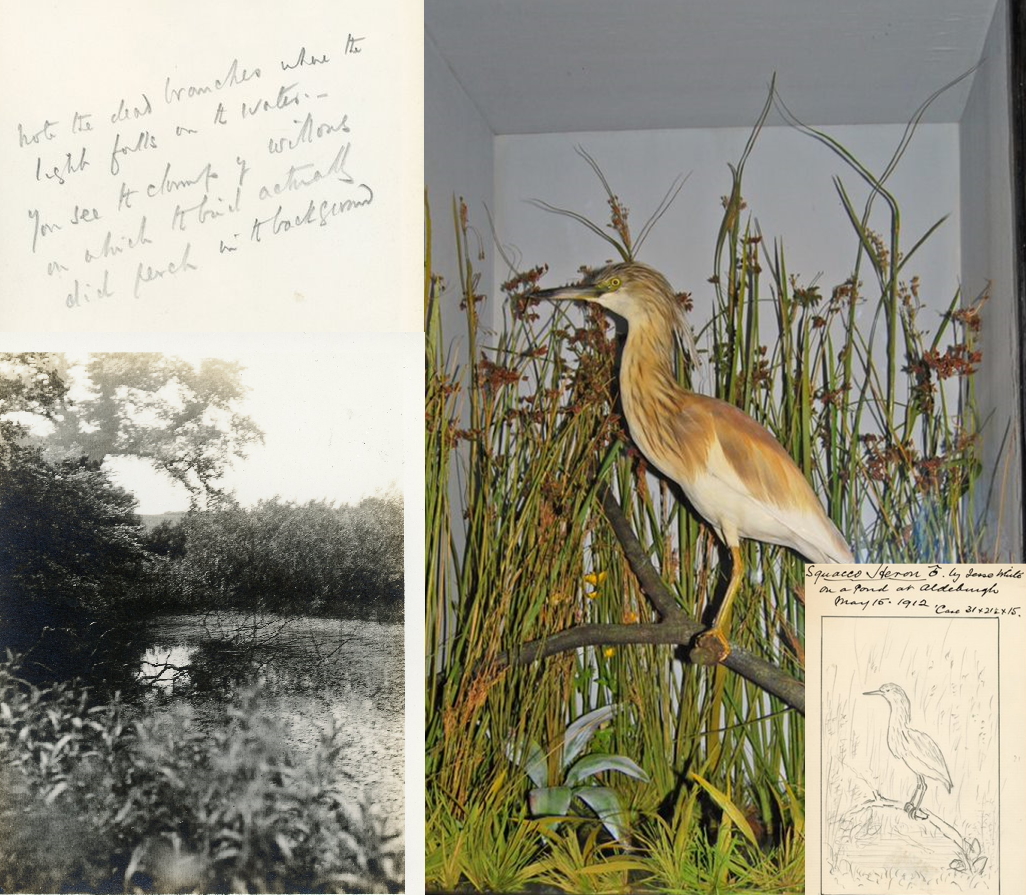 In the late 1800’s cameras were nowhere near as common as they are now, although amateur photography was becoming more so. This meant that unless you relied on drawings, if you wanted a realistic depiction of the natural world you had to recreate it using a different approach.

Fergus Menteith Ogilvie wanted to create a collection that could be used to identify birds by showing how they looked in the wild. He commissioned the naturalist Thomas Edward Gunn to taxidermy and build cases for the birds in his collection. Because Ogilvie wanted his collection to look realistic, he would give Gunn drawings of where he had seen the birds. Gunn would then send him sketched plans of the case layout for Ogilvie to proof before building began.

On one occasion, when the Squacco Heron case was made, Gunn even had a picture of where the bird had been spotted before it was collected. Not only did Gunn know exactly what environment the bird had been living in, he could even place it on a recreation of its final perch! 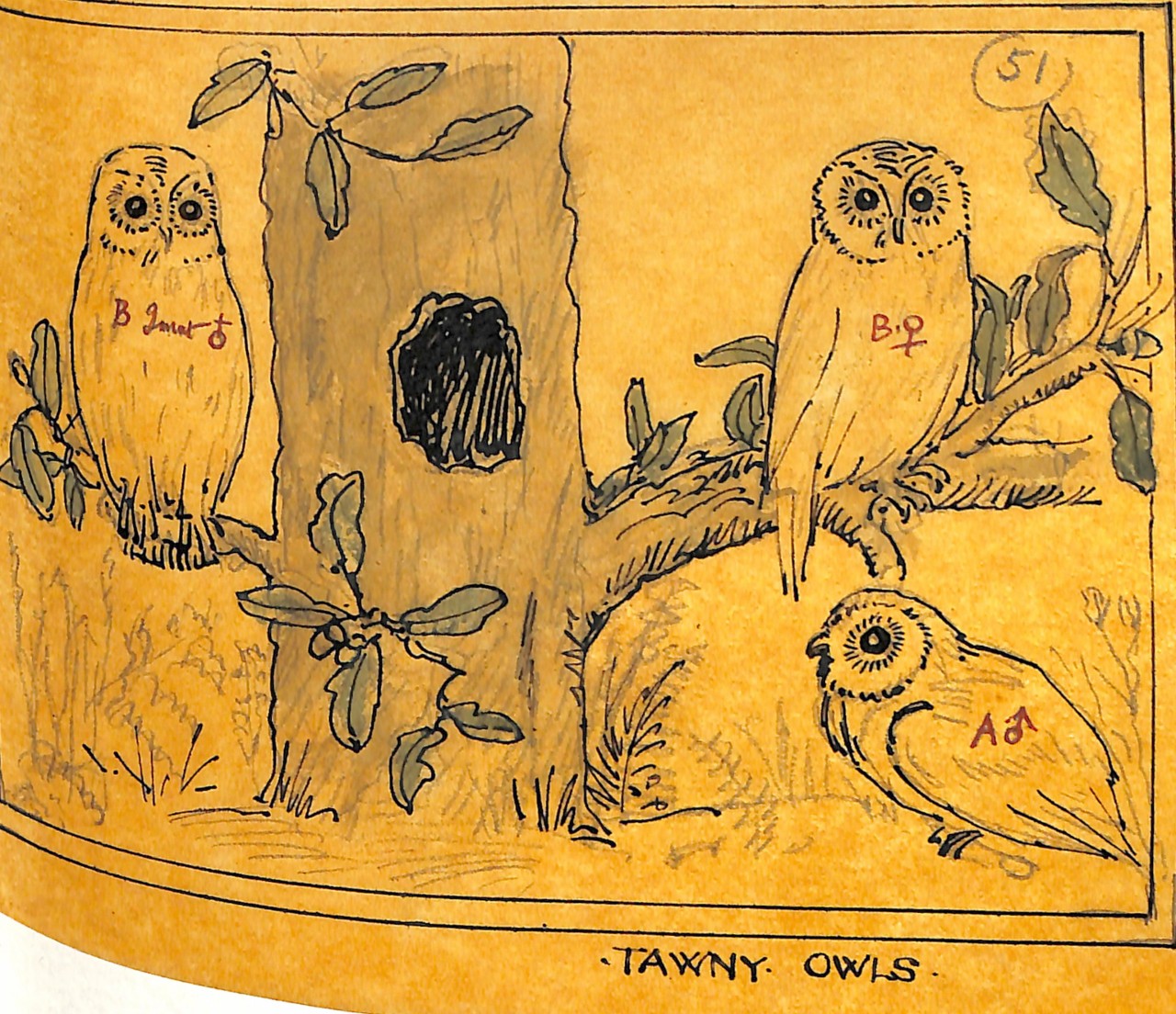 It’s easy to think that once the glass was placed in front of the bird case, Ogilvie would never change what was inside. But he didn’t always feel that they were finished. Ogilvie felt they weren’t complete enough or that the birds weren’t a good enough example of what he wanted to show. On multiple occasions he changed the birds that were in a case. We have records of what changes were made for a lot of these, but sometimes the only evidence are the sketches in the collection and hints of missing information.

The Tawny owl case is an example of this. In the notes we have from Ogilvie, only three birds are mentioned and the sketch we have of the case also shows three. However, when we look at the real thing, we find that a fourth bird was added at some point (as you  can see at the top of this blog post). This is a rare example where we have no information about one of the animals in Ogilvie’s collection.

The owlet in the trunk of the tree completes the picture Ogilvie wanted to create. Offering examples of a male, a female, immature adult and an owlet, so that we can see how they look as they age, and the variety of colours owls come in.

The Grebe That Almost Got Away

One of Ogilvie’s most prized cases was that of a Red-necked Grebe in summer plumage. This case had been a gift to him by Gunn and was one of “the finest examples of this Grebe in summer plumage” ever collected in the country.  It is one of the rare cases where the sketch does not match the reality, as it is incorrectly coloured in and the sketch appears to be a mirror image of the real one.

Gunn had worked with Ogilvie for many years on his collection so, when Ogilvie died, his widow wanted him to oversee the packing up and moving of the collection. When May Ogilvie was deciding what parts of her husband’s collection would go to which museum, she decided to keep a few cases for herself. When Gunn approached her asking if he could have the red necked grebe case, along with a few others, she saw no reason to say no.

Henry Balfour, who was another friend of Ogilvie, had been helping May in arranging the transfer of the cased bird to Ipswich Museum. He was concerned by this, noticing that Gunn had requested only the most valuable specimens as keepsakes of Ogilvie. Balfour was especially distressed by the Red-necked Grebe as it was vital, in his opinion, that this specimen should be at the museum.

After raising his concerns to May, she informed Gunn that he could no longer have the Grebe, but if he wanted, he could have some of the less valuable cases instead. But Gunn had already taken the Grebe. When May Ogilvie learnt of this, she ordered him to return it. From that point, Balfour made sure to be present whenever Gunn was helping with the packing of the collection, to make sure he didn’t take the Squacco Herron, Night Heron or the Temminck’s Stints, as these were the next most valuable cases.

We don’t know exactly what she told him, or what his reply was. But we know that not long after, Gunn invoiced the museum for the transport of the case to the museum. We may never know which cases he selected to replace the Grebes, but we do know that some of the cases that left Sizewell Hall never made it to Ipswich Museum, and that this Grebe was almost one of them.