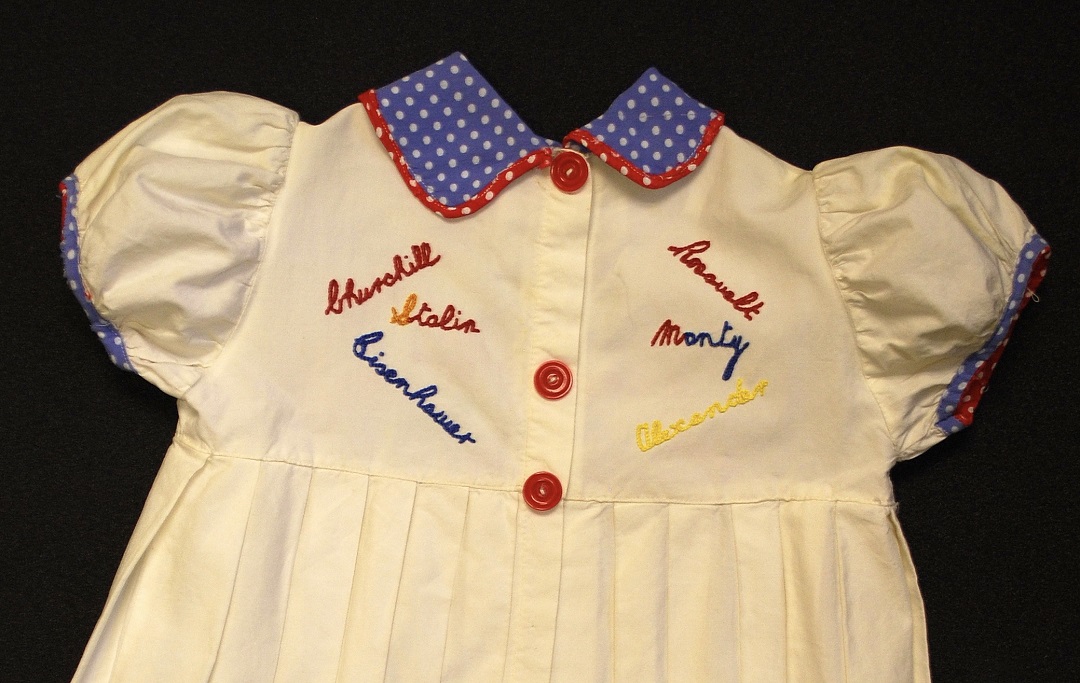 The 8th May 2020 marks 75 years since ‘Victory in Europe’ or VE Day. This important anniversary commemorates the end of World War Two in Europe and the Allied nations formal acceptance of Nazi Germany’s surrender. This blog post looks at one very special object in the collection that was worn on VE Day.

The 8th May 1945, is typically remembered for lively street parties bringing together neighbours, friends and family members. Images depict bunting hanging across the roads, children playing, fun and games and, despite extreme shortages, party food for all. Some people dressed up for the occasion and we have a dress in the collection that demonstrates this. 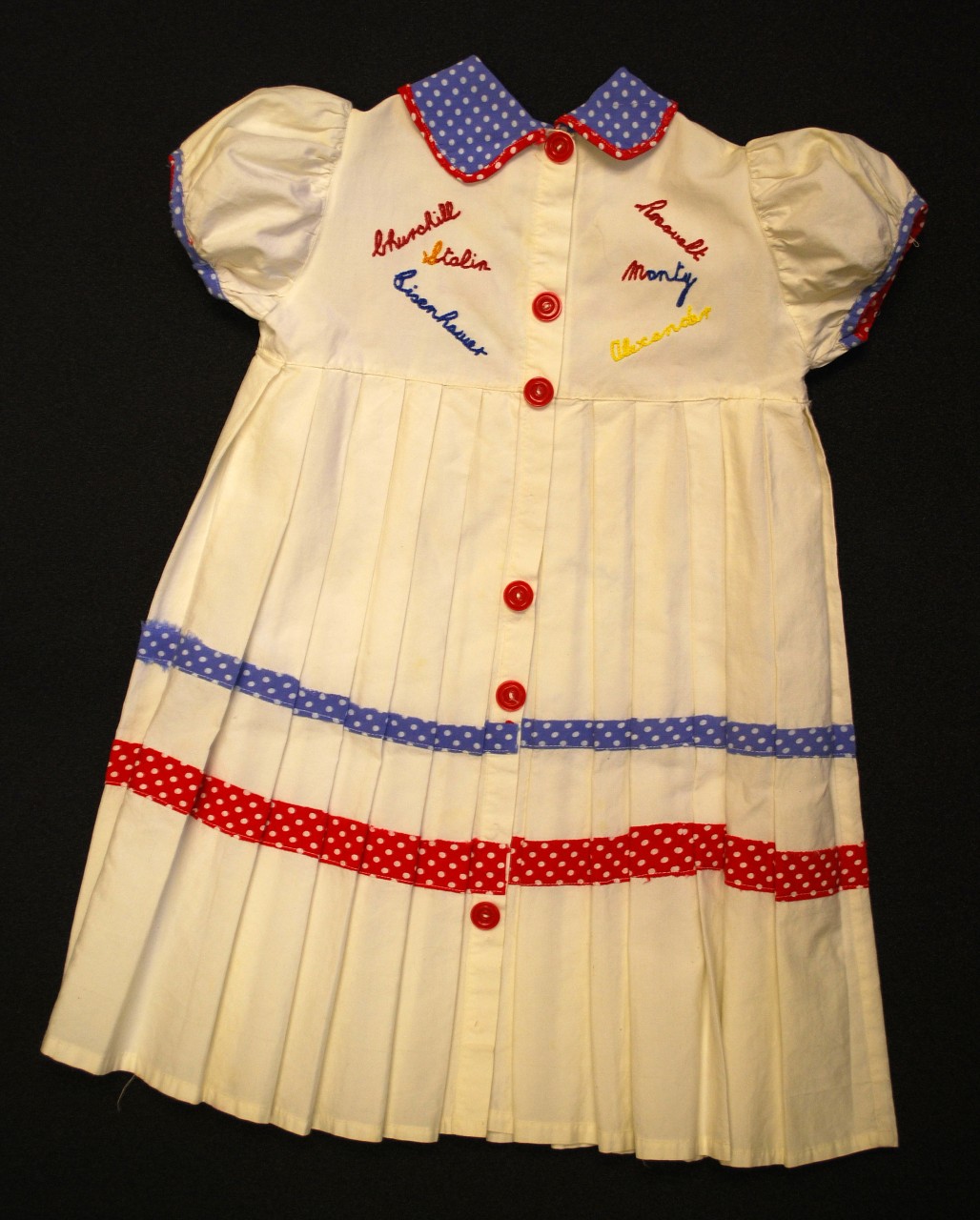 This little dress was made by a local lady called Hilda Watts, who created clothes for various members of her family using a Singer treadle sewing machine. She made this dress for her granddaughter, Pamela Andrews. The dress was originally fairly plain, yet to celebrate VE Day, Pamela Andrew’s mother, Silvia Lambert, embroidered the bodice. Across the front of the dress are the names of some of the Allied leaders and significant figures associated with World War Two. These are:

This is an interesting selection and perhaps relate to whom Sylvia deemed most important. 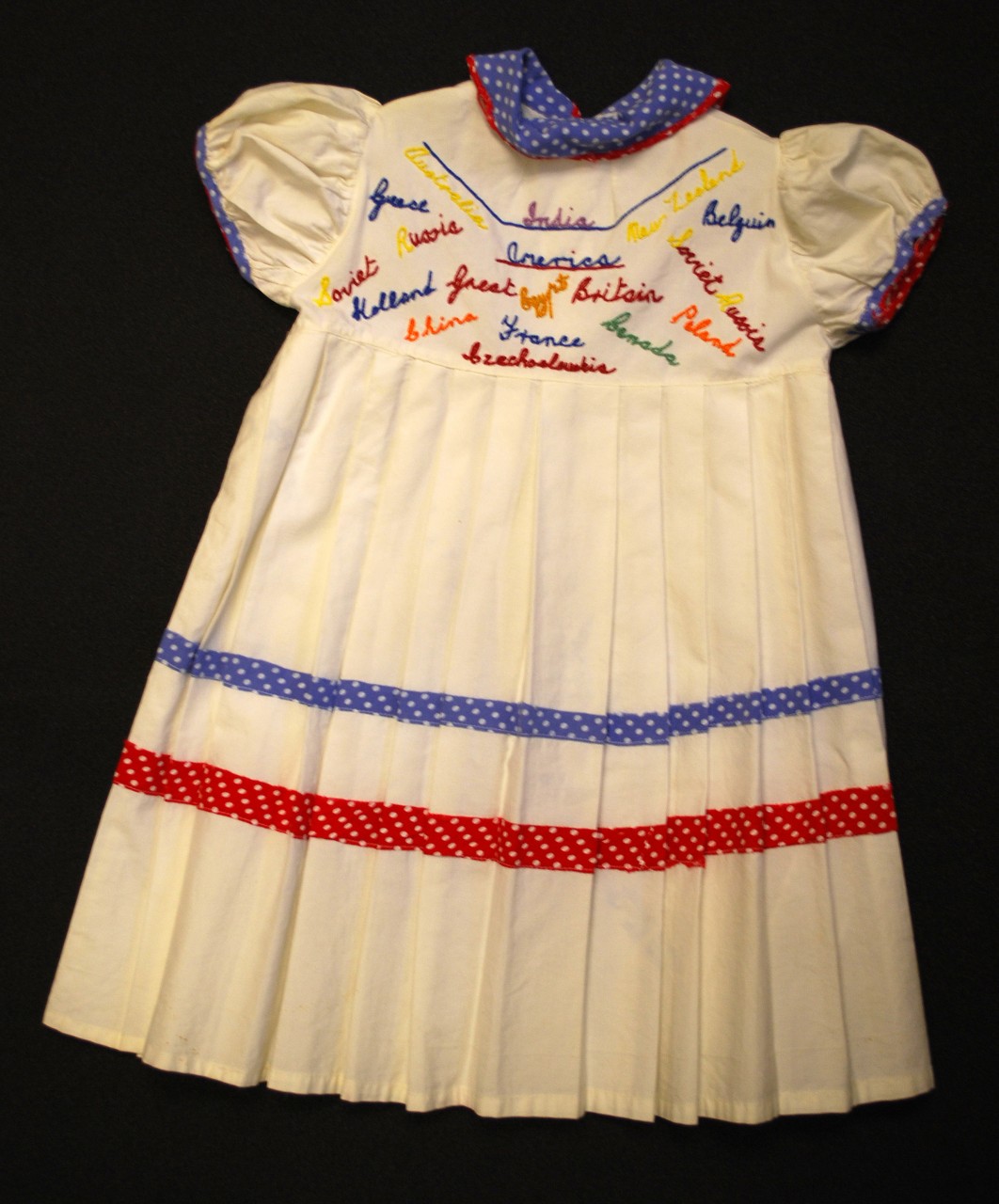 The back of the dress is embroidered with various allied nations that stretch beyond the chief allied powers: Great Britain, France, The Soviet Union and The United States. The embroidery includes; Poland, Belgium, Australia and New Zealand, recognising the importance of other nations in defeating Germany. Unfortunately, we do not know how or why Sylvia selected the people and nations she embroidered, but clearly this selection meant something to her or perhaps her wider family.

The rainbow colours the names are embroidered in suggests the jubilation felt by many at the end of the war in Europe – although it should be recognised that World War Two did not officially end until September 1945. Some of the nations embroidered across the back, including India and China, playing a key role in helping to defeat Japan.

During World War Two clothes, like many other commodities, were rationed with people having to ‘make do and mend.’ Clothes rationing continued until 1949, and clothing was in very short supply in the years immediately following the war. This makes this little dress an even rarer survivor. Whilst many people would have celebrated VE Day, it is perhaps surprising that the embroidery was not unpicked and the dress put to other uses. As images prove (currently inaccessible due to the COVID-19 pandemic), Pamela wore this dress prior to her mother embroidering it. Perhaps she was growing out of it and there were no other children needing the dress. Certainly it’s a special piece in our collection, which commemorates an important event in 20th century history!