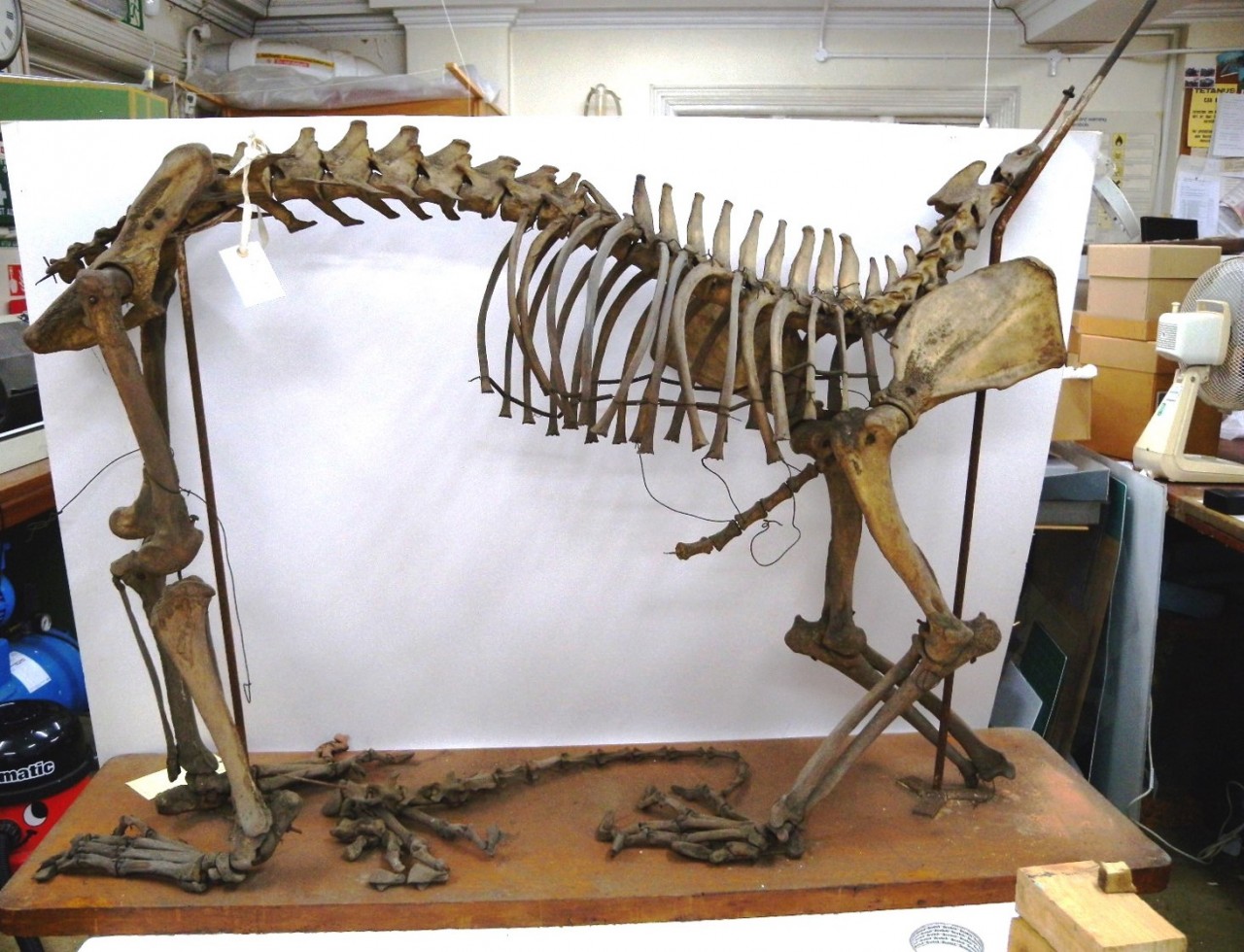 The following is taken from a presentation given by Robert Entwistle ACR and Emma Hogarth, Conservation Officers for Colchester + Ipswich Museums, at a NatSCA conference

The article by Lori Covington “A Sticky Solution”, in Icon News issue 65 for July 2016, was similar in content to some research undertaken in Colchester + Ipswich Museums.

Whilst preparing some Victorian mounted animal skeletons for display, we encountered problems with residues from previous treatments. Many of the bones in our collections had the appearance of being treated in the past with disfiguring shellac or similar sticky resinous materials, which had darkened. This has been compounded by grease emanating from imperfectly prepared bones, and general dirt attaching to the surface over many years. The bones had previously been displayed under gaslight which had exacerbated their appearance still further. The specimens were unregistered so had no documentation.

The reason for the project was to display the material in a Victorian gallery, but at very little cost to the service. The bones had an un-aesthetic appearance, and had to be cleaned. 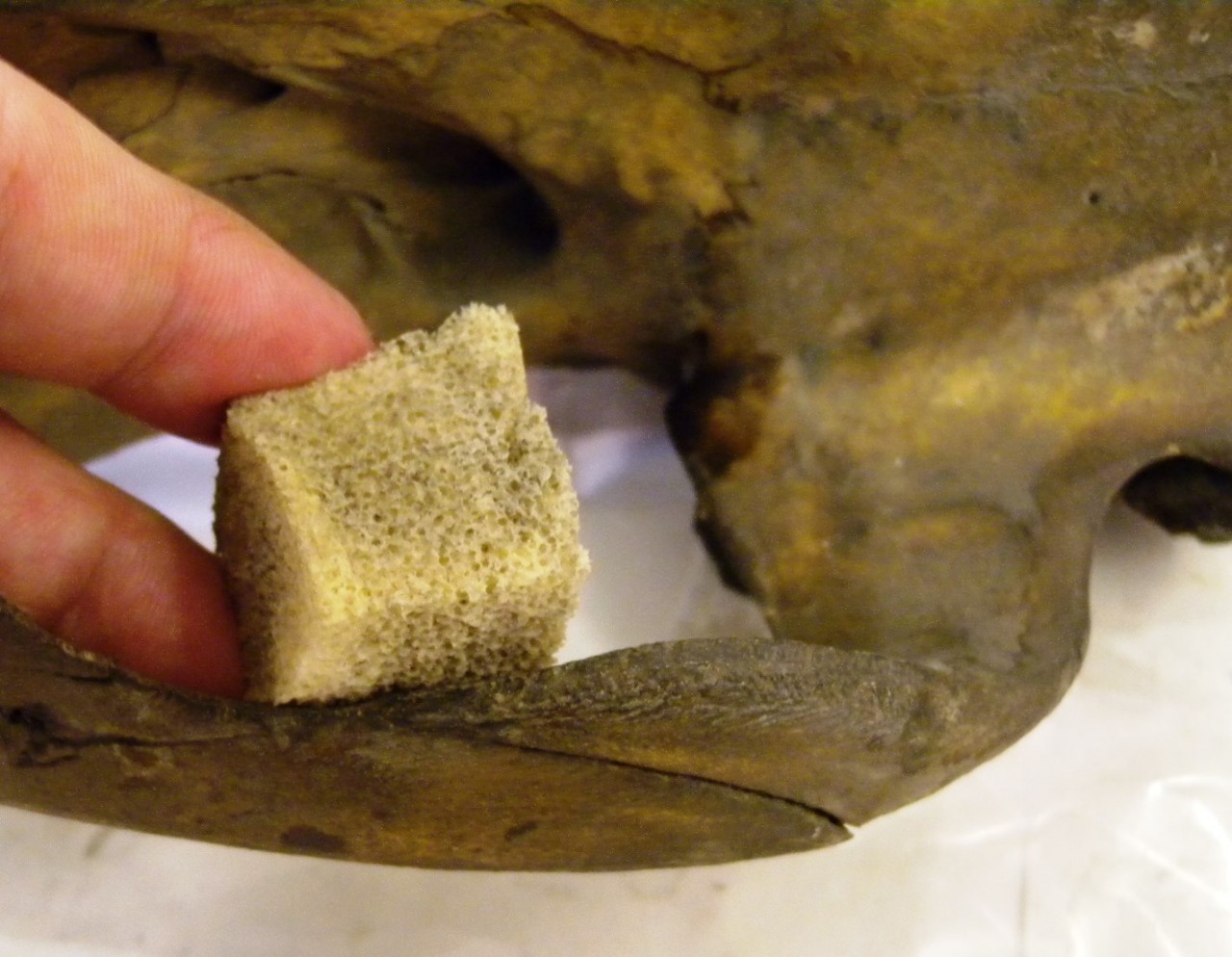 Our initial attempts to remove the coatings involved basic cleaning techniques such as smoke sponges, vacuum, water, detergents and solvents. Beyond removing some of the surface dirt, these had little effect on the bones’ appearance. As standard conservation techniques had little impact we decided to use more interventive methods.

In the past, curatorial staff has undertaken the removal of similar shellac type coatings, and also grease and dirt using an alkaline cleaner in a poultice, which could also be used as a paint stripper. These were off the shelf DIY products.

We needed to remove the coatings but in a more controlled and ethical manner. Initial tests had shown that some solvents softened the resin and shellac slightly, but did not remove it. Therefore it was decided to test various low-tech (cheap) methods of poulticing using a variety of solvents.

A large cat skull, again devoid of documentation, was selected from store. This was particularly dirty with grease and coated with various substances, so was chosen to be cleaned with our test materials.

For the purposes of the tests, success would be determined by a perceived improvement in surface colouration, ie. Something no longer brown/black and approximating more to a natural bone colour. This was admittedly a subjective approach, but the simplest and most effective one available, particularly given that the ultimate goal of the project was to improve the appearance of the bone. 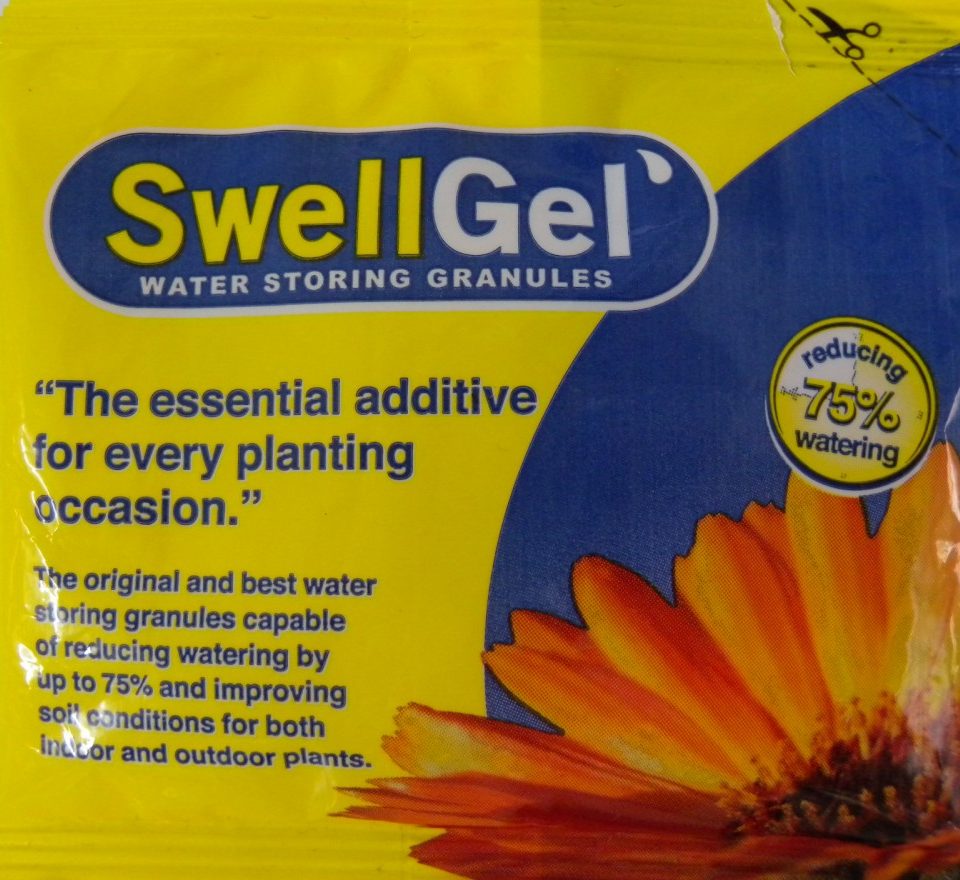 The carriers we tried were Laponite, Sepiolite, methyl cellulose and SwellGel. SwellGel is an anionic polyacrylamide: a highly water-absorbent polymer, forming a soft gel when hydrated. It is the substance used by gardeners to bulk out compost. When mixed with water the crystal powder swells into small gel balls/clumps. Being ph neutral and non-toxic, it looked like it could offer a cheap and safe alternative to more expensive poultice materials. 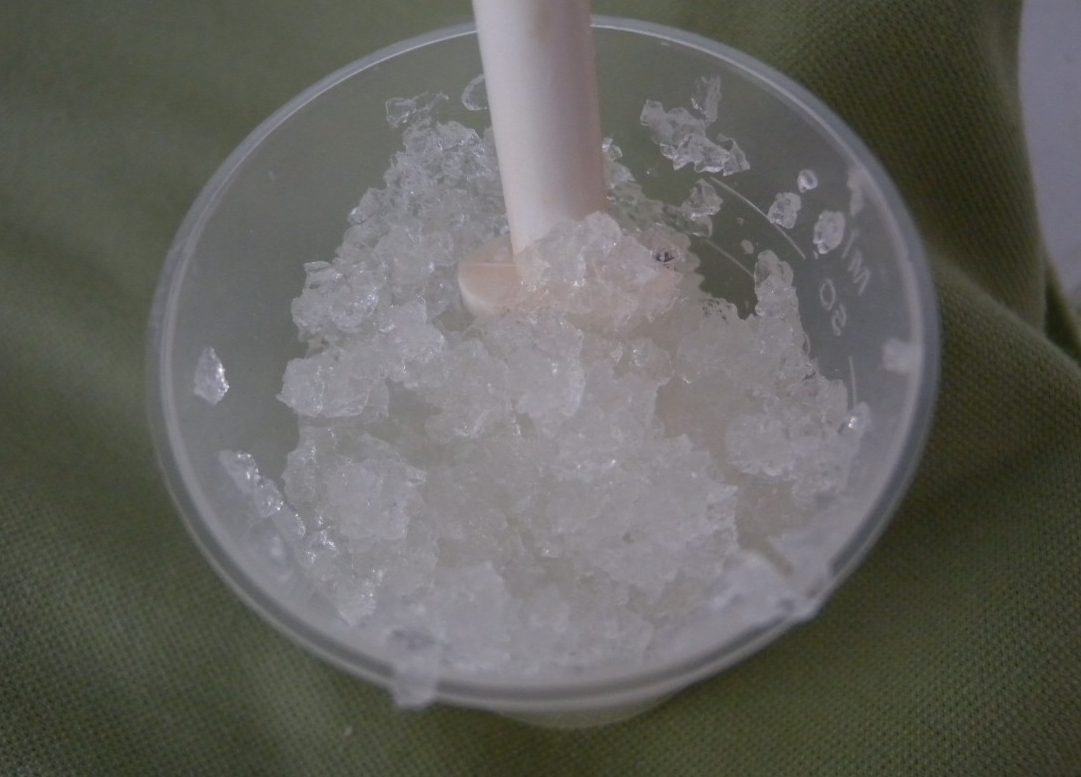 The poulticing materials were mixed with various solvent combinations. In a nod to the paint stripper methods of old, we also tried Nitromors and other paint stripping agents such as Ecostrip, and basic cleaners such as sugar soap. Using these in poulticing materials, the percentage could be reduced, thus lessening the chance of damaging the specimen and also safer for the user. Each gel formulation was applied to a discrete area, and this covered with cling film or foil to reduce evaporation rates. 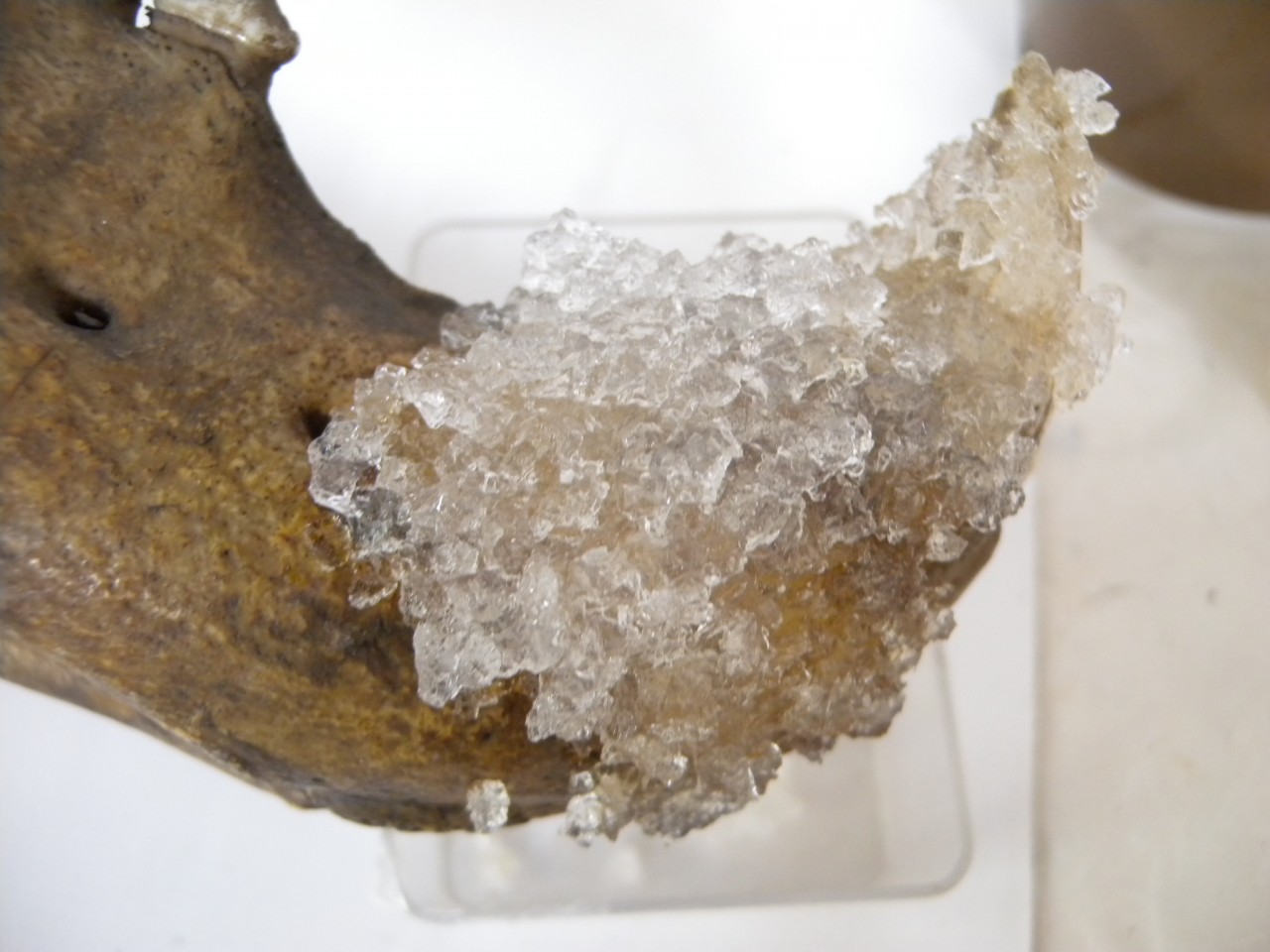 The gels were applied in varying concentrations and durations. Of the gels and poultices tested, methyl cellulose and SwellGel gave the most satisfactory results. Both Laponite and Sepiolite left residues that penetrated the surface and were hard to remove.

Methyl cellulose and SwellGel held the solvents well. Of the two, the methyl cellulose was more thixotropic and held to vertical the surfaces better for obvious reasons. SwellGel was perfectly acceptable on flatter surfaces but needed support on vertical surfaces. Depending on the solvent, both absorbed and loosened all the resinous deposits. They were easy to remove and gave no appearance of surface penetration or residues, although this would need more detailed clarification. 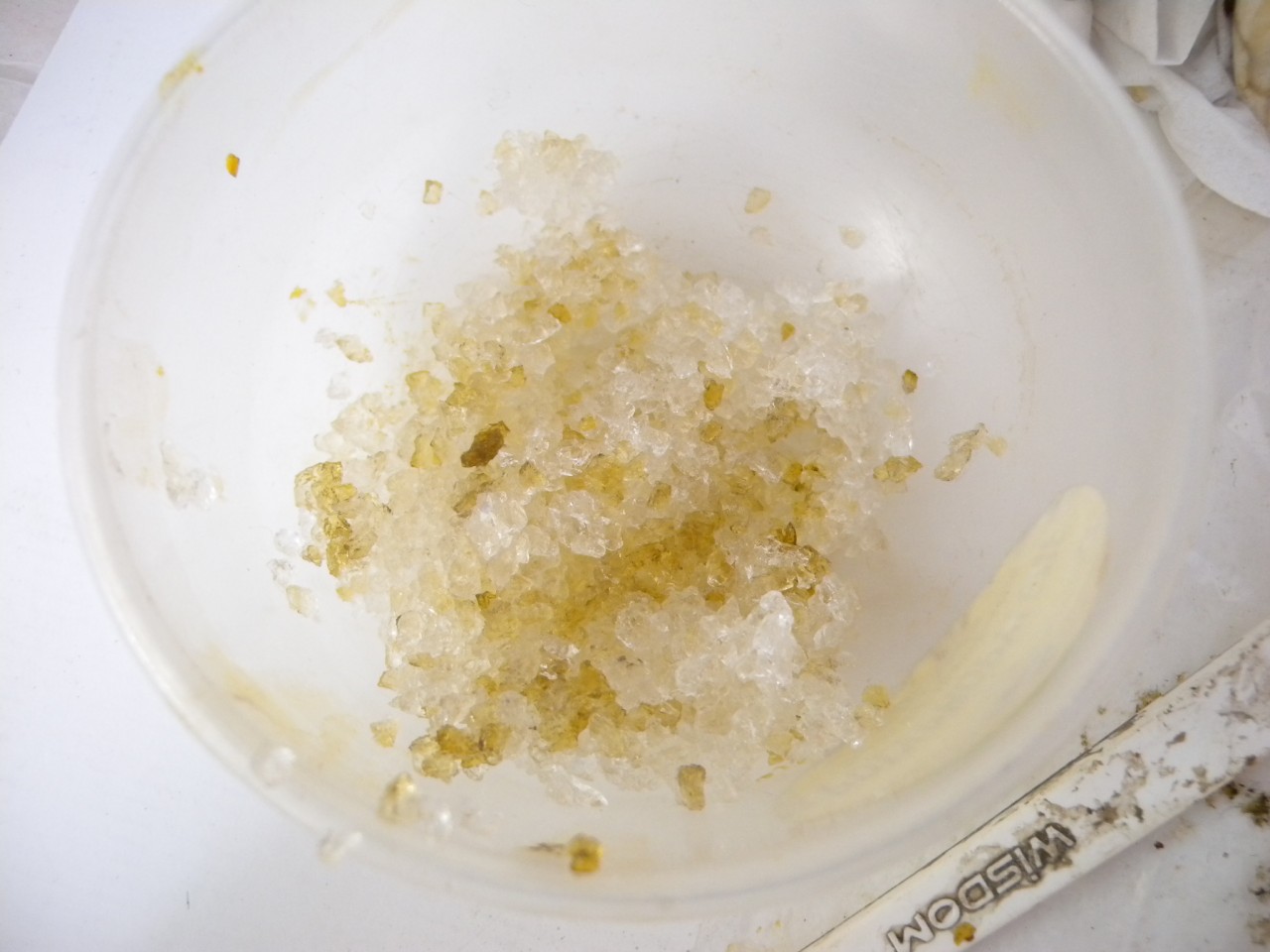 We suggest that these could be used as a cheap and readily available carrier. SwellGel, in particular, is available in most florists, garden centres and large DIY shops.

The MSDS were consulted and gloves and PPE worn for the processes. 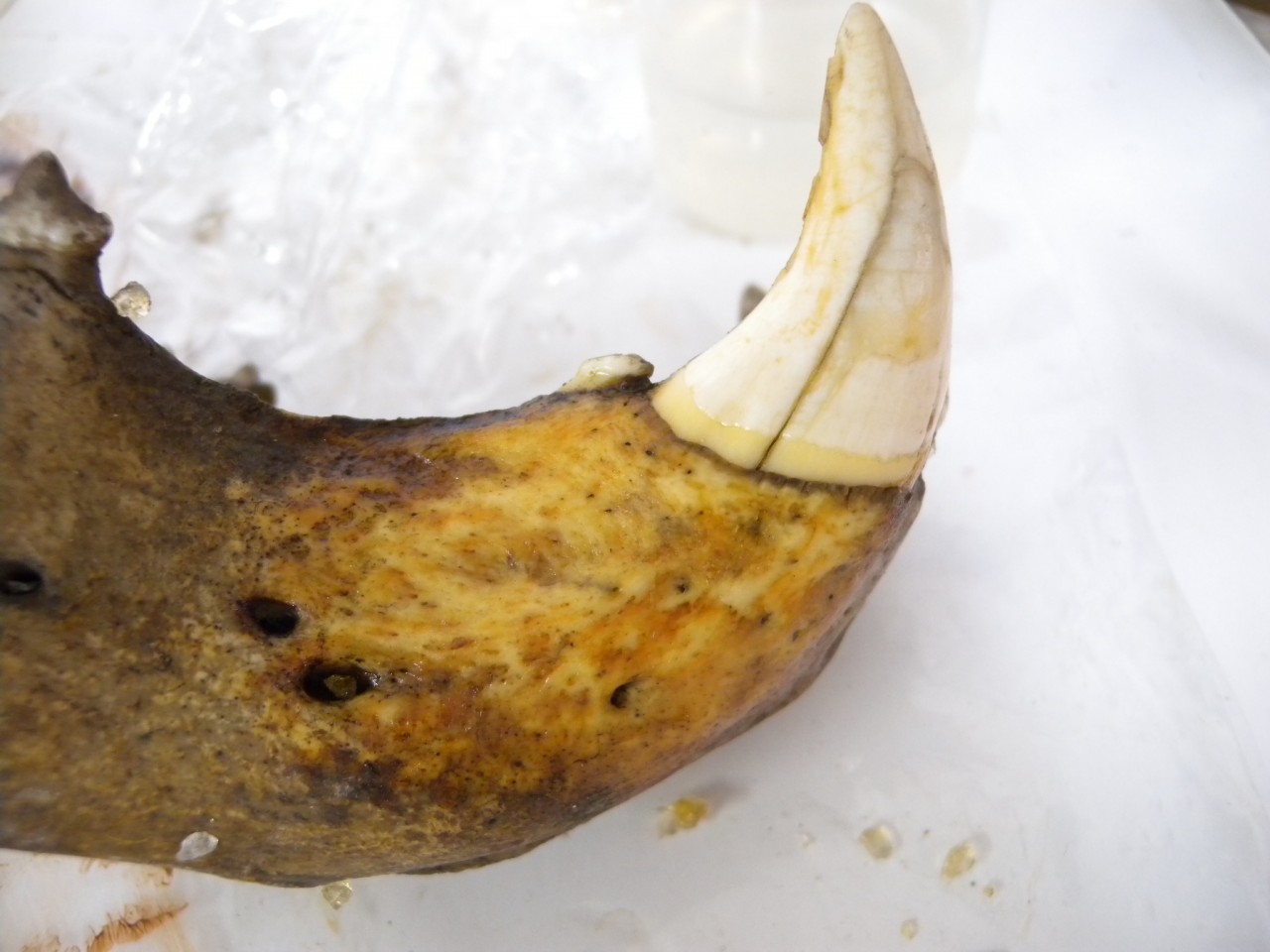