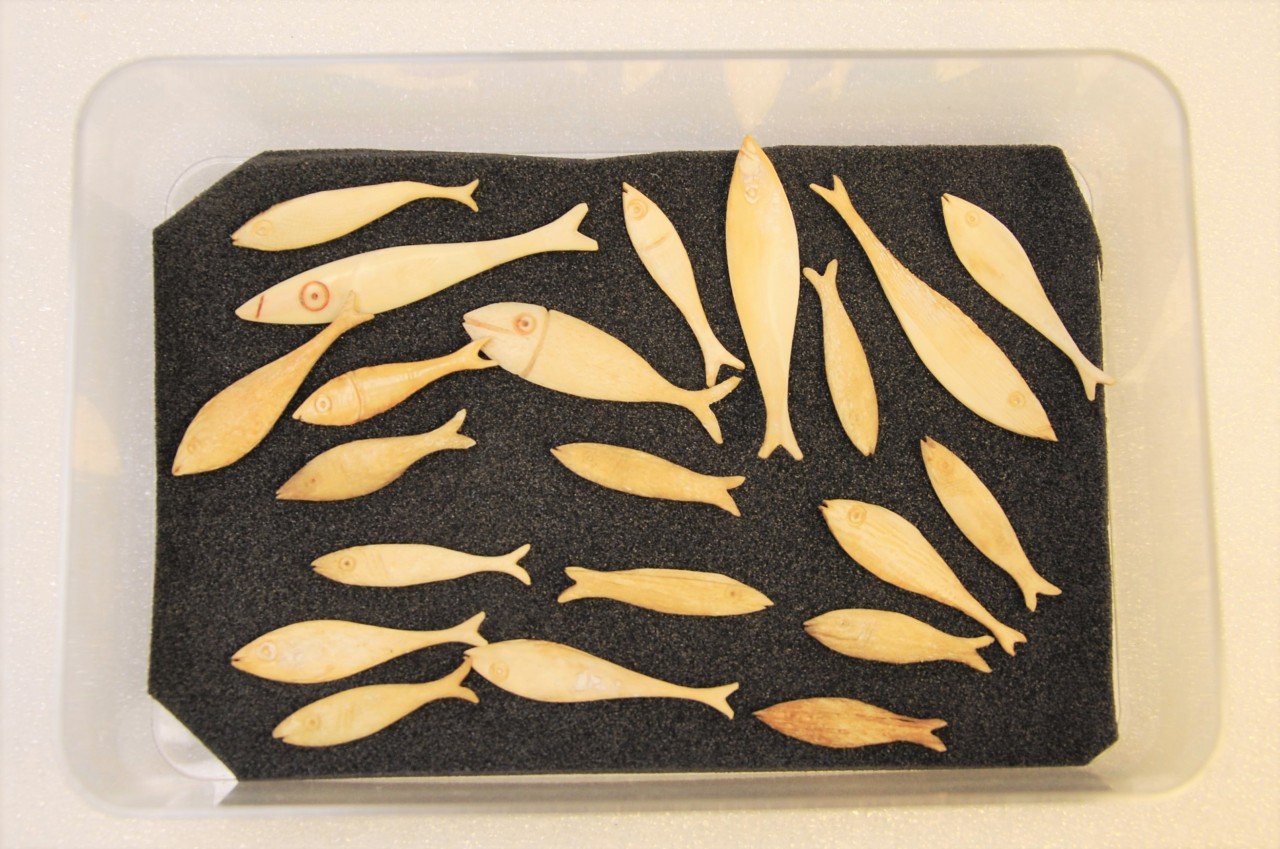 Hello, my name is Cym and I’m the new Conservator at Colchester Museums. I’m starting this blog to share some conservation-related stories and interesting objects with you.

One of the first things I did when starting this job was to audit all the objects in the conservation lab and conservation fridge/freezer. Freezers are used by conservators primarily to kill any pests that might live in objects, but also on occasion to stabilise material until it can be treated at a later date. In the freezer I found a bag containing what looked like carved ivory fish, suspended in a block of ice along with unknown fibrous green and orange material. I asked around and discovered that the fish, which are unaccessioned objects in the collection, were found in a store room in a plastic bag that had deteriorated and fused to them. Different types of plastic degrade at different speeds and in different ways, and sometimes they can become sticky as they deteriorate. In an effort to halt deterioration of the plastic, the objects were frozen and left for some time.

Because the fish were completely saturated with water (waterlogged) and frozen, the first step was to melt the ice. The ice block was taken to the conservation lab and slowly thawed by running lukewarm water over it. The fragments of deteriorated plastic in the ice were removed and discarded.

When treating waterlogged bone or ivory objects it is very important that they be dried out slowly rather than simply allowed to air-dry. If they are air-dried this can lead to severe warping and cracking – damage that is irreversible once it occurs.

To dry out the fish, I used a technique called solvent drying. To start with, I stored the fish in a container filled with a 50/50 mixture of water and industrial methylated spirit (IMS) – essentially ethanol alcohol. Every week I increased the amount of IMS and reduced the amount of water in the mixture until the fish were stored in 100% IMS. I then briefly moved the fish to a dish containing acetone to complete the drying process. The fish were then removed and dried on a paper towel. No warping or cracking was observed, but the fish were fragile and had suffered some damage from having been waterlogged and frozen. The surface of the objects was pitted, and one fish had split into two parts.

As the final step of the treatment, when the fish were completely dry, they were consolidated (i.e. a dilute adhesive mixture was applied to the surface) to stabilise them. I used a conservation-grade adhesive called Primal B60A because it works well on organic material such as ivory and bone and it has a very minimal impact on the appearance of objects. When applied correctly it does not stain the surface or make it appear shiny, which some other adhesives can do. The fish that had split apart was joined with full-strength Primal B60A and secured with small clamps until the adhesive had set completely. The 22 fish are quite charming little objects with different sizes, shapes and carved details. They are now stable and being returned to storage. It is unclear at this stage what the fish might have been part of, or used for. They do not have any holes through them or fastenings attached, and they have carved decoration on both sides. Do you have any theories?