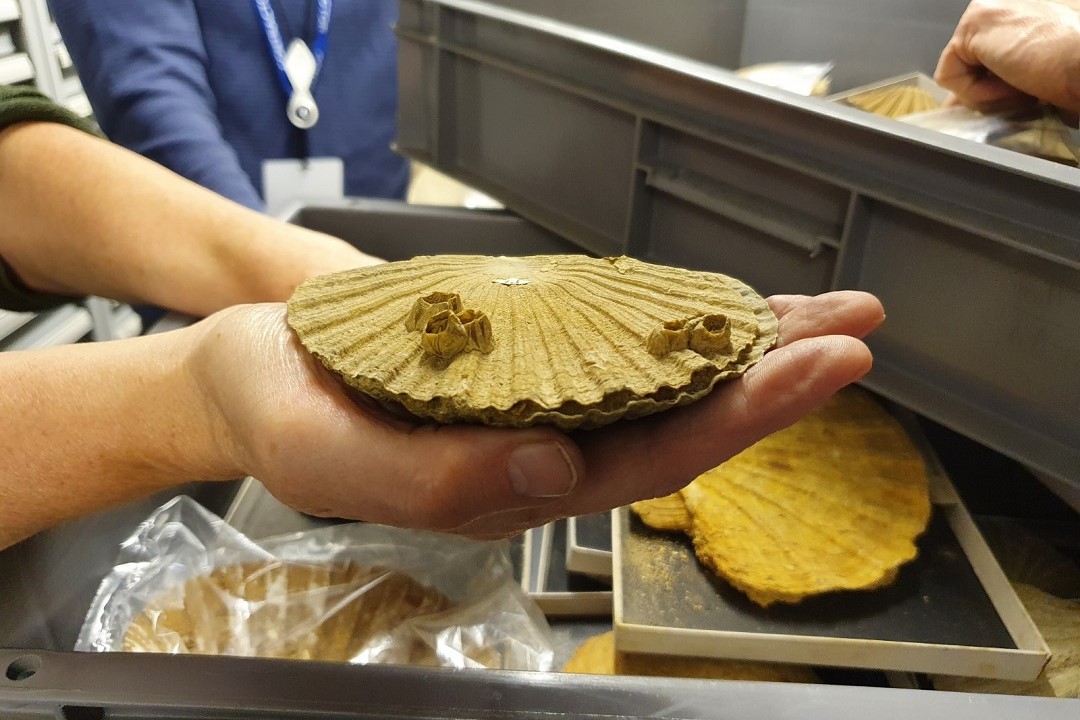 New palaeontology investigations are peering into the unknown sea temperatures of the past, before the ice age. Today, we welcome Dr Andrew Johnson from the University of Derby, and his research team, who are using fossil mollusc shells (e.g. clams, cockles) to reconstruct past temperatures of the North Sea and beyond.

With the impacts of climate change becoming ever more evident, it’s never been more important to understand how Earth and its former inhabitants have fared in the warmer climates of the geological past. Such investigations could provide vital insights into what Earth might be like in our warmer future. One such previous warmer time is the Middle Pliocene, about 3 million years ago, some 500,000 years before the ice age. This time has been reconstructed as being 2 to 3°C warmer than today – about the same kind of temperature we may face by 2100 – with current policies in place 1. Therefore, this period of Earth history has attracted considerable research interest.

In Britain, the warmer time of the Pliocene is recorded in the deposits of the East Anglian crags – shelly rocks which were laid down by a ‘larger’ North Sea, which extended further inland in the past. Based on the crag fossils, from as early as the 1800s, researchers inferred that this ancient, Pliocene North Sea was much warmer than today and, in fact, more similar to that of the Mediterranean 2. For instance, the large clam, Panopea glycimeris, lives today between northern Spain and the north-western coast of Africa, enjoying warm Mediterranean-like temperatures. Therefore, its presence at this time, in the Pliocene, seems to support the idea that the North Sea was then warmer. However, new research is questioning this view, at least in this part of the North Sea, where these abundant crag molluscs can be found. Andrew Johnson’s team have been studying bivalve shells from this area, from the Pliocene to the present day. The shells are very sensitive environmental indicators – by studying the chemistry of the shell, the temperature of the water in which the animal lived can be estimated.

Already, some surprising results are coming to light. Sampled shells, so far, indicate that, during the Pliocene, these parts of the North Sea, had winter temperatures similar or even cooler than those of the present day (at 6-7°C) while summer bottom temperatures were perhaps slightly lower (at 12-18°C) 2. So, perhaps the Middle Pliocene was not so warm, after all, at least in this southern part of the North Sea? However, much further work is needed to corroborate this – Johnson’s research team have been extending their studies to other species and are currently undertaking a comprehensive investigation.

This is where the internationally significant geology collections at Ipswich Museum come into play.

Surrounded by walls of boxes, the small research team of three stand closely huddled around a pillar of grey boxes jampacked full of ancient shells. The area is abuzz with excitement as discovery after discovery is made… The collection provides a sort of library for localities, sites and species which could be considered during the project, including other specimens in the University of Cambridge Sedgwick Museum of Earth Sciences and those collected from fieldwork. The collection includes numerous individuals of certain molluscs such as the Panopea glycimeris, mentioned above, and also other ‘warm water’ species, such as ‘Cardita senilis’, for which there are more than 200 crag specimens at Ipswich. Interestingly, the collection also includes Coralline Crag examples of Arctica islandica, an edible clam which is a contender for the longest lived animal, living more than 500 years, which is restricted to cooler waters of the North Atlantic. The presence of these warmer and colder water species also paints a particularly complex picture of the Pliocene North Sea – did these species really live alongside each other, or was one species transported away from elsewhere? Only by studying well preserved specimens, such as specimens in the Ipswich collection, can this be possibly resolved.

The team of three eagerly rummage around in the box, atop the ‘pillar’ of grey crates. Professor Elizabeth Harper’s face lights up as something catches her attention.  She pulls out 2 ear-shaped shells, one in each hand, excitedly remarking, “This is amazingly preserved”. “Wow” and “we’ve not seen this before” follow as the team enthusiastically work their way through the specimens, one by one, commenting on the exceptional preservation and abundance of specimens in the collection. In summary, the Ipswich collection of crag molluscs may provide insights into how warm the Middle Pliocene actually was, at least in this North Sea region – this in turn is vital for determining how good a model this time is for understanding our rapidly warming 21st century world. The fossils, then, are the key to the past and to the future.