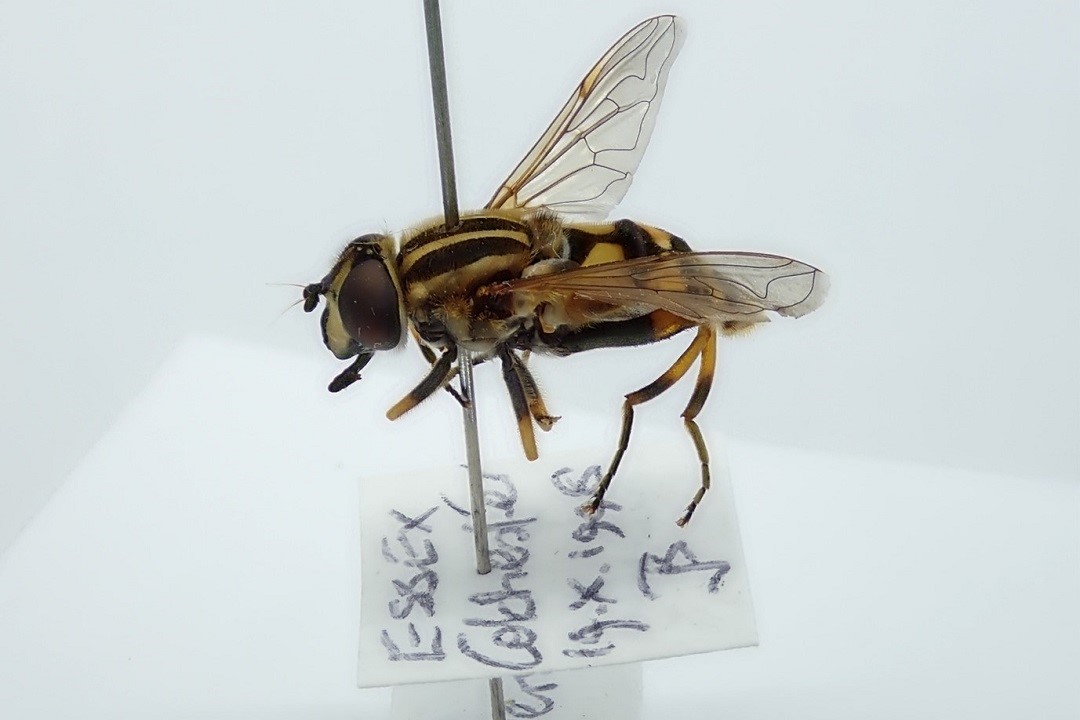 Why Look At Hoverflies?

Insect collections provide a record of past biodiversity and can help scientists find out how land use and climate change is affecting different ecosystems. When these collections are donated to museums, they often arrive in specimen boxes. As part of a John Ellerman Foundation-funded project, I documented 13,845 specimens in 45 boxes, 12,983 of these were flies! Now that they are documented, the next step is to transfer them into the main entomology collection.

Flies are major pollinators, with hoverflies visiting at least 72% of food crops globally, and approximately 70% of all animal pollinated wildflowers. Hoverflies are migratory, with some species travelling hundreds of kilometres in a day, spreading the pollen they’ve collected. They even travel across the Channel!

Hoverflies are one of the most eye-catching fly families. From a distance, it can be easy to mistake hoverflies for a bee or wasp, as many hoverfly species are bee and wasp mimics, but don’t worry they don’t sting!

How To Spot A Hoverfly

There are four easy ways tell a hoverfly from a bee or wasp:

Look at how it flies

Hoverflies, as the name suggest, can hover. So, if ever your sitting or walking outside and something that looks like a bee or wasp approaches you but then stops in mid-air, that’s definitely a hoverfly!

Look at its eyes A close-up photo of the head of a male narcissus bulb fly, Merodon equestris, as seen from the front.

Flies have large round eyes this gives their heads a very different appearance to bees and wasps. Many hoverfly species can have their sex determined by looking at whether its eyes touch at the top of the head. But both males and females have eyes that cover a much large proportion of their head than bees and wasps.

Look at their wings

Close-up photos of the left wing (left) and haltere (right) of a narcissus bulb fly, Merodon equestris, as seen from the front and above.

All flies have one set of wings and one set of halteres. Halteres are a specially adapted wing that is much smaller than the first set. It acts like as stabiliser and gyroscope, allowing flies to perform sharp turns quickly. Bees and wasps have two pairs of wings, although sometimes the second pair are so closely placed to the first that they might seem like one. In addition, hoverflies have very distinct wing vein patterns, with the vein running parallel to the edge of the wing but not touching it.

Look at its waist

Bees and wasps belong to the insect order Hymenoptera, and all have a narrow ‘waist’ between the thorax (where the wings and legs are attached) and the abdomen (the tail of an insect). In bumblebees and other hairy bee species the waist can be hidden by the hairs, making it harder to spot. In flies the waist is wider. A European Hornet (left) and Hornet Mimic Hoverfly (right), both caught in in Colchester.

The hornet mimic hoverfly, Volucella zonaria, mimics the appearance of the European hornet, Vespa crabro. It is one of the biggest hoverflies you can see in the UK. It first established itself in Britain in the 1940s and was originally considered a Mediterranean species. Climate change may be one of the reasons for its range expansion into southern Britain and its current expansion into more northern areas.

Its large size, striped appearance and loud buzzing helps it be mistaken for a European hornet by predators. Another reason for its appearance is that it lays its eggs in wasp nests. When they hatch its larvae eat dropped food and wasp larvae.

The bumblebee hoverfly, Volucella bombylans, comes in two varieties, both mimicking different bee species. They can be told apart by the colour of their tail.

A bumblebee hoverfly with a orange-brown tail (left) and red-tailed bumblebee (right). Even though they do not look exactly like the bees they are mimicking, they still look similar enough that predators don’t eat them. The hairs that cover their bodies mean that, like with bumblebees, they carry off pollen when they visit flowers, transferring it from one to the next.

Another way they have evolved to seem like bees is they lay their eggs in beehives. When they hatch, the larvae eat any dropped food, pupa case and other insects in the hive. They will occasionally eat bee larvae, but they mostly act in a way that doesn’t harm the hive. A lesser bulb fly, caught in Colchester (A), and two sweat bees: Lasioglossum quadrinotatum (B) and Lasioglossum laevigatum (C).

The lesser bulb fly, Eumerus tuberculatus, is a less obvious mimic – and not only because it is so much harder to spot! This hoverfly can easily be mistaken for sweat bees belonging to the Lasioglomma genus.

While they don’t mimic a single species, its small size, and the fact that females like hiding under the leaves of dying bulb plants like daffodils, makes it hard to identify as a hoverfly. The reason that these hoverflies can be found under the leaves of bulb plants is that females lay their eggs there. When they hatch the larvae will burrow down into the ground and into the bulb of their host plant and start to eat it. This behaviour labels them as pests in the eyes of many gardeners!

Why not check out our new hoverfly online collection to see some of the other species you might spot?