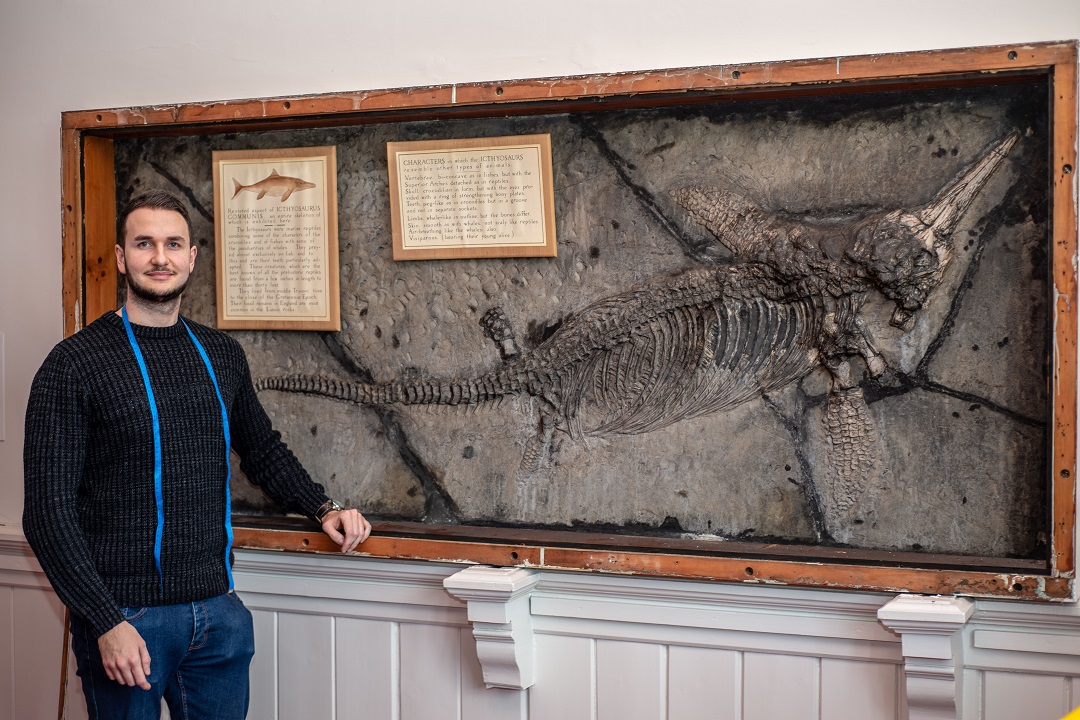 Back in the summer, Dean Lomax from the University of Manchester visited Ipswich Museum and gave staff the opportunity to see an exhibit close-up for the first time in over 70 years. As a world expert on fossilised sea monsters, he has studied most specimens in museums across the UK and Ipswich Museum was one of the last places he needed to visit. The purpose of this trip was to examine the Ichthyosaur fossil, built into the wall at the top of the stairs. So what did he think of it?

“This is a lovely example of a species I described a few years ago called Ichthyosaurus somersetensis, a species that is known mostly from quarries around the village of Street, Somerset, where this specimen was collected. Most of the examples I’ve seen before have showed the ichthyosaur from the side, while the Ipswich Museum specimen is preserved from the top – this gives a different view of the species.”

Originally from Somerset, the specimen was first recorded as being in Ipswich Museum in 1880. Ichthyosaurs were swimming reptiles that lived in the sea during the Triassic, Jurassic and Cretaceous periods. This specimen lived during the Early Jurassic, just under 200 million years ago. Dean told the museum that the upper back fin is not genuine, instead a front limb has been stuck on to make the specimen look more complete, which was typical during the 1800s.

While the case was open it gave museum staff the opportunity to clean the specimen and carry out some conservation, helping to keep the ichthyosaur in good condition and inspiring visitors for the next 140 years.