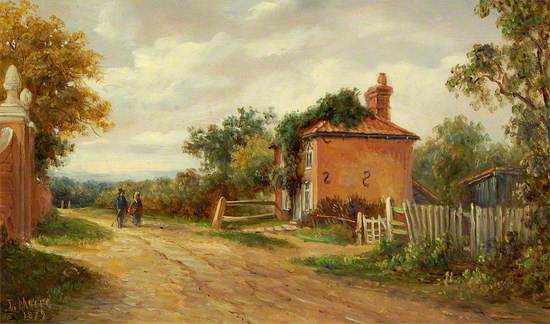 ‘A painter of land and sea’ by Emma Roodhouse, Collections and Learning Curator

* Click on the photos below to visit our Collections Online database and discover more about Moore. *

“Visitors to the gallery always look for a collection of happy sea pieces and his remarkable success in landscape painting last year makes one also hope that he will not continue his attention exclusively to the watery element.  It is here, however, that his greatest successes are achieved;  his seas are irreproachable and his ships are made to “walk the waters like a thing of life”.  SUFFOLK CHRONICLE. Jan 19th 1889.

The artist John Moore was well known for his maritime paintings and is so rooted to his locality that he was called John Moore of Ipswich, although he was born in Woodbridge. 2021 marks 200 years since his birth and a chance to celebrate Moore’s artworks. There are over 40 paintings by Moore in the Ipswich collection and his work has been gifted, purchased, and left in bequests over the years. The Promenade and River Steamers, Ipswich, 1882, oil on canvas

Moore was born in Woodbridge, Suffolk and baptised in February 1821. The son of Martin Moore, a plumber, painter and decorator and Elizabeth Warren. The young John was apprenticed to the trade of plumbing and signwriting but not much is known about his early life. Woodbridge had an interesting community of artists and it could be that Moore became familiar with the work of Thomas Churchyard, George James Rowe and the many places for sketching by the River Deben.

He married Caroline Upson (c.1822-1877) and had a son John Gordon in 1843. The family lived in Woodbridge, with Moore working as a house painter. He is likely to have been self-taught as an artist and we have no record of formal art training. By 1871 the family had moved to Ipswich, perhaps prompted by the possibility of finally being able to establish himself as a painter. Moore now worked solely as an artist in oils and his son John, who was blind, became a basket-maker. Unfortunately, in 1877 Caroline died and Moore re-married in 1878, Harriet Kersey (1838-1900) at St Mary’s Church, Woodridge. Ipswich’s busy port provided perfect subject matter for Moore and there were many wealthy clients from the various maritime and industrial trades. Local families of the time would support notable artists of the region and Moore was engaged by the Cobbold family to paint scenes in Scotland and Northumberland.

Moore quickly became involved in the Ipswich artistic community and joined the Ipswich Art Club at its formation in 1874. His small landscapes sold for £5, and up to 30 guineas or more for larger, important works. When the first exhibition of the Ipswich Fine Art Club was reviewed in the East Anglian Daily Times in 1875, John Moore was described as one of the best marine painters and a ‘successor to Clarkson Stanfield’. Edward Packard (1843-1932), founder of the Art Club and later President, was a very influential figure in Ipswich business and cultural circles and bought several art works by Moore.

The Moore paintings in the Ipswich collection provide a clear overview of his life and work. There are the notable maritime scenes on a grand scale and Ipswich scenes from the town and docks. Moore lived in Tower Ditches for several years and when he painted this view of his neighbourhood it would have been very familiar to him.

Moore eventually went to live with a friend at Diss and in 1902 passed away having ‘wielded the brush with unabated vigour till almost the very last’. Ipswich Journal, 12th April 1902 . He is buried in Ipswich Cemetery.

You can also discover more examples of his work by exploring our John Moore of Ipswich collection online.