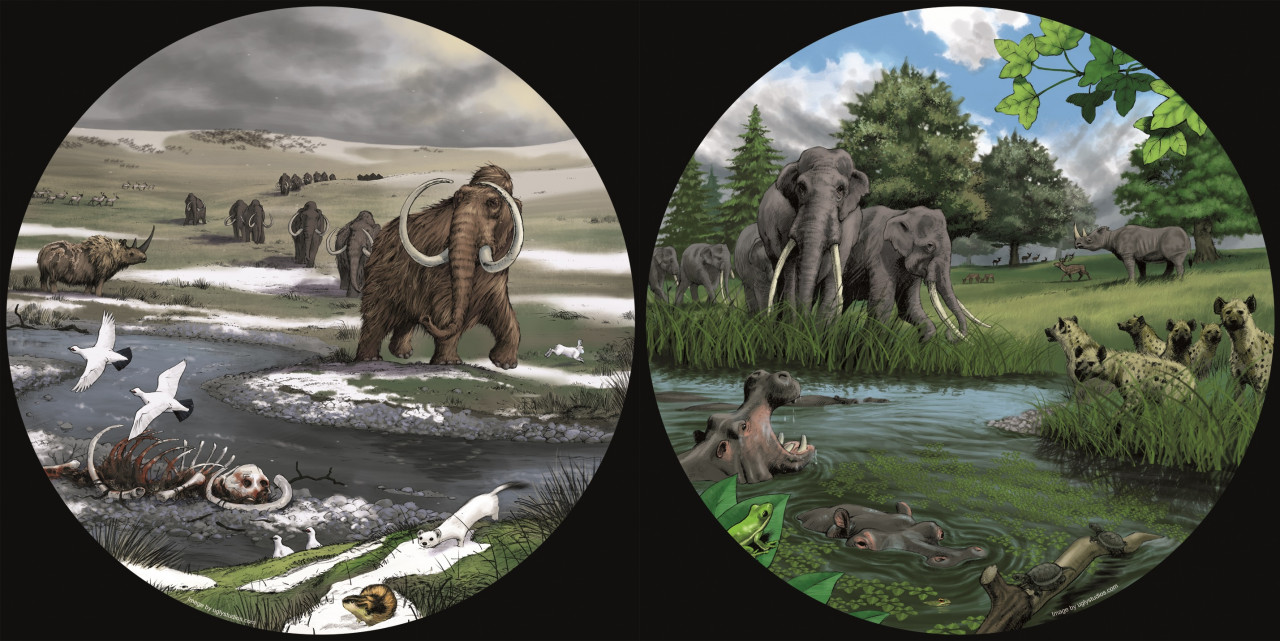 Some of my favourite specimens in the Colchester Natural Science collections are the mammoth fossils. These large (and often heavy) fossils are evidence that this area was once home to a number of mammoth species.

Mammoths, and the elephants alive today, are members of an animal family called the elephantidae. Mammoths were adapted to the often-harsh conditions of life in northern Europe during the Pleistocene (up to 3 million years ago). Many species were hardy enough to survive the freezing temperatures of the glacial periods of the ice age. Although most mammoths died out 10,000 years ago, a dwarf species survived on an island north of Siberia until 4000 years ago. Mammoths became extinct due to changes in climate along with hunting by humans.​

While documenting the Pleistocene fossils in the collection we have found teeth from four elephantid species: the Southern mammoth, Steppe mammoth and Woolly mammoth, as well as the Straight-tusked elephant.

The Southern mammoth (Mammuthus meridionalis) was the ancestor of both the Steppe and Woolly mammoths. They ate trees, shrubs and grasses.

The Steppe mammoth (Mammuthus trogontherii) was the largest elephantid, almost twice the size of African elephants today. They had a similar diet to the Southern mammoth.

The Woolly mammoth (Mammuthus primigenius) lived during the freezing glacial periods of the ice ages. They survived due to a combination of their woolly coats and ability to survive on a diet of grasses, sedges and mosses which was all there was to eat in northern Europe at the time.

The Straight-tusked elephant (Palaeoloxodon antiquus) fossils in the collection, belonged to a huge elephant species. It could grow to over 4 metres tall and had a long tongue which it used, along with its trunk, to feed from trees such as ash, hazel and beech. Living mostly in the Mediterranean, they would venture north to this area during the warmer, interglacial periods between the ice ages.

Like modern elephants, mammoths had large tusks and large molar teeth. As most of the fossil bones in the collection are fragments, it is from these molar teeth that we can identify their species. Southern mammoths ate soft leaves so their teeth had just a few plates, whereas Woolly mammoths needed more plates to slice through tough sedges and grasses. Woolly mammoth molar tooth with that of a Southern mammoth below. After Louis Laurent Gabriel de Mortillet, Public domain, via Wikimedia Commons

Some of the mammoth fossils in the collection have been at the museum for a very long time. Those donated before the 1950s were part of the Colchester and Essex Museum collection (COLEM) as opposed to the Colchester Natural History collection (COLNH). Some of these were collected by Dr Charles Bree (1811 – 1886), a doctor at the Colchester and Essex Hospital from 1859 to 1881. During his lifetime he collected a large number of natural history specimens, many of which are in the Colchester collections. Bree was a fierce opponent of Charles Darwin’s theory of evolution published in 1859, and believed that life on earth was created by a divine power. In 1872 Bree published his own book ‘An exposition on the fallacies in the hypothesis of Mr Darwin’. The book contained a number of inaccuracies and was attacked by a number of well-respected reviewers. A fossil molar tooth of a Steppe mammoth found in 1873 at Orford Ness, Suffolk. From the Charles Bree Collection.

Many of our mammoth fossils and other fossil mammal bones from the Pleistocene, were donated by local fishermen. While trawling for fish off the coast, such as at Harwich and Dovercourt, Les Brand collected hundreds of fossils in his fishing nets, and kindly donated them to the museum. You can often spot these dredged fossils by the worm tubes or evidence of barnacles on them. A fragment of fossil bone from the back leg of a Woolly Mammoth. Dredged at Gunfleet Bank in 2012.

You can discover more examples in our Mammoth Fossils collection online.

Amendments with thanks to Tori Herridge, palaeontologist at the Natural History Museum in London.