Many Colours to Visitor Services 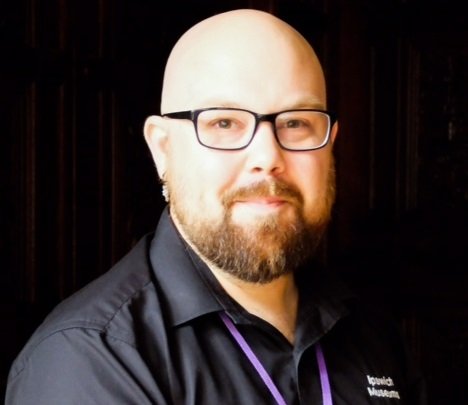 In my last ever Trainee blog post, I promised I’d be back in black (and purple). True to my word, I stand here in the regal colours of Ipswich Visitor Services. During the events I’m going to write about however, I‘ve ironically rarely been garbed in black or purple!

Ever since my first shifts at Colchester Castle as a Trainee, I loved working within Visitor Services. It is far more than simply standing at desks and patrolling the museums. I love interacting with visitors and helping them learn in new and engaging ways (particularly if it involves live interpretation!). At Halloween, I was part of a Tudor Murder Mystery. This was devised primarily by Curator Kate Riddington, though she and I worked together on some of the logistics and details. I played the role of a villainous Prior who – upset by the closure of his priory to make room for Christchurch Mansion – set out to take revenge!

The children really seemed to enjoy hunting for the clues and helping to free the “ghosts” trapped in purgatory, by revealing their killers. We got lots of positive feedback and hopefully there will be another mystery to solve next Halloween!

Just the other week, I was able to spend a whole night at the museum, helping ensure that the Ipswich Brownies’ sleepover went smoothly. Admittedly, I was not really in costume for that (unless you count my onesie!) but it was still a unique and fun experience. The Brownies got read a bedtime story by a professional storyteller and were given an exclusive Ipswich Museum Brownies badge! As well as these more exclusive events, I really enjoy being part of Ipswich’s school sessions. I regularly lead our Ancient Egyptians workshop and am being trained to lead World War II and Pre-history. There is at least one running every weekday, so – combined with all their other duties – Visitor Services are kept very busy.

Finally, I am extremely excited to be involved in spearheading a live interpretation programme within Ipswich Visitor Services. I’ve traded in my Colchester Celt costume and started patrolling the galleries as an Anglo Saxon from the kingdom of East Anglia! Not only is live interpretation really fun, I truly believe it has the power to enrich people’s experience and open up the world of history to those who might not otherwise connect with it via traditional museum methods. For example, a partially-sighted man was able to handle my replicas of Saxon tools and weaponry (blunt of course!) and a group of teenagers – who I had overheard complaining about how “boring” museums were – instantly engaged with my character and, by the end, were claiming that they were going to get Anglo Saxon rune tattoos.

Despite only being here six months, I’ve been involved in so much more than one might assume from the title “museum assistant”. So, if you pop in, who knows what you might find me doing!