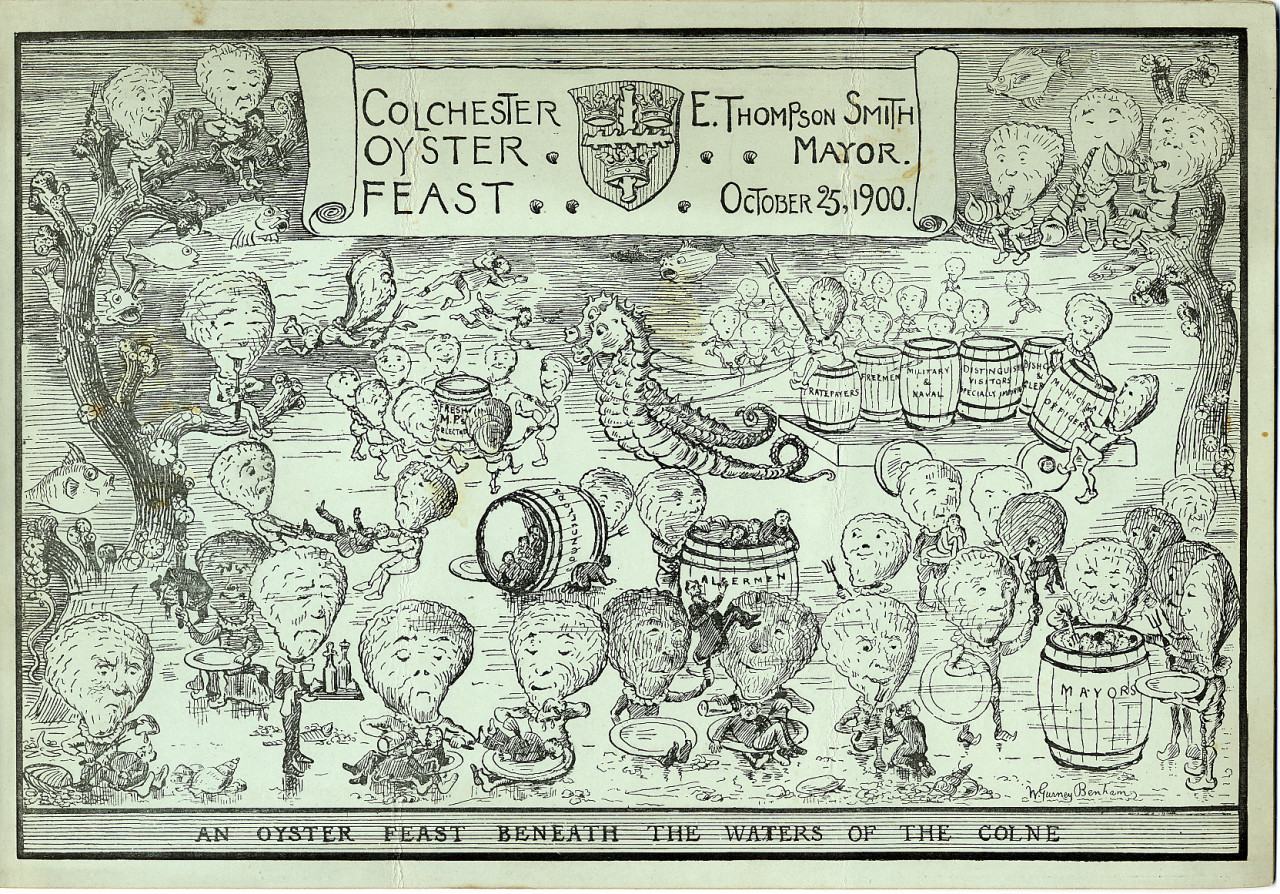 Colchester is renowned for its ‘Colchester Native’ oysters. The oyster fishery is officially opened for business on the first Friday of September each year by the Mayor of Colchester and an Oyster Feast is held on the last Friday in October at Colchester Town Hall. The feast is regarded as one of the key events in the town’s local calendar and is attended by both locally and nationally important people. The Oyster Feast was first held in 1845, introduced to the civic calendar by the Mayor Henry Wolton, but its origins can be traced back to the St Denis Fair of the 1300s.

In this blog post I will concentrate on the programmes that were created for the Colchester Oyster feast, and the man behind their design for over 40 years, William Gurney Benham. Artwork by Benham for the 1899 Oyster Feast

William Gurney Benham was born in 1859. His father, Edward Benham, was a printer. In 1884 William took over the family printing business and became editor of the Essex County Standard with his brother, Charles Edwin Benham (we also have a rich selection of artefacts in the collection that belonged to or were associated with Charles). William was passionate about the local area and transcribed many historic documents relating to Colchester, particularly those from the Medieval period. In addition, William was mayor three times, during 1892/93, 1908/09 and 1933/34. In 1933 he became the High Steward of Colchester and in 1935 was actually knighted in recognition of his public service.

We do not have a complete run of Oyster Feast programmes in the collection, although the period between the 1890s and 1930s is well represented. It seems that William illustrated all (or almost all) of the programmes created between c 1890 and 1936. It is interesting to note that William was creating these illustrations and his company, Benham and Co, were printing the programmes too.

Unquestionably William was a talented illustrator, and the illustrations he created for these programmes were whimsical and used his artistic licence, often anthropomorphising the local oysters.

He was certainly deeply invested in local history and, whilst very knowledgeable about Colchester, many of the programmes contain amusing invented ‘facts’. These covered both oysters and the local area, as can be seen in the programme from 1921.

Another somewhat macabre illustration can be found at the top of this post. It depicts Colchester native oysters on the bed of the river Colne, feasting on various council dignitaries in a reversal of what might normally happen at the Oyster festival. Programme by Benham from 1898

Illustrations such as those in this post were found not only on the front pages of the programmes, but inside too. Above you can see some of William’s comic book style illustrations, which featured in the 1898 programme.

William Gurney Benham’s programmes speak of Colchester’s rich history, even if at times he used his own artistic licence to portray it. They also demonstrate that Benham should be recognised as an extremely talented local polymath; a local mayor, newspaper editor, author, and importantly for this blog post, an illustrator too.

You can discover more examples in our Colchester Oyster Feast collection online.