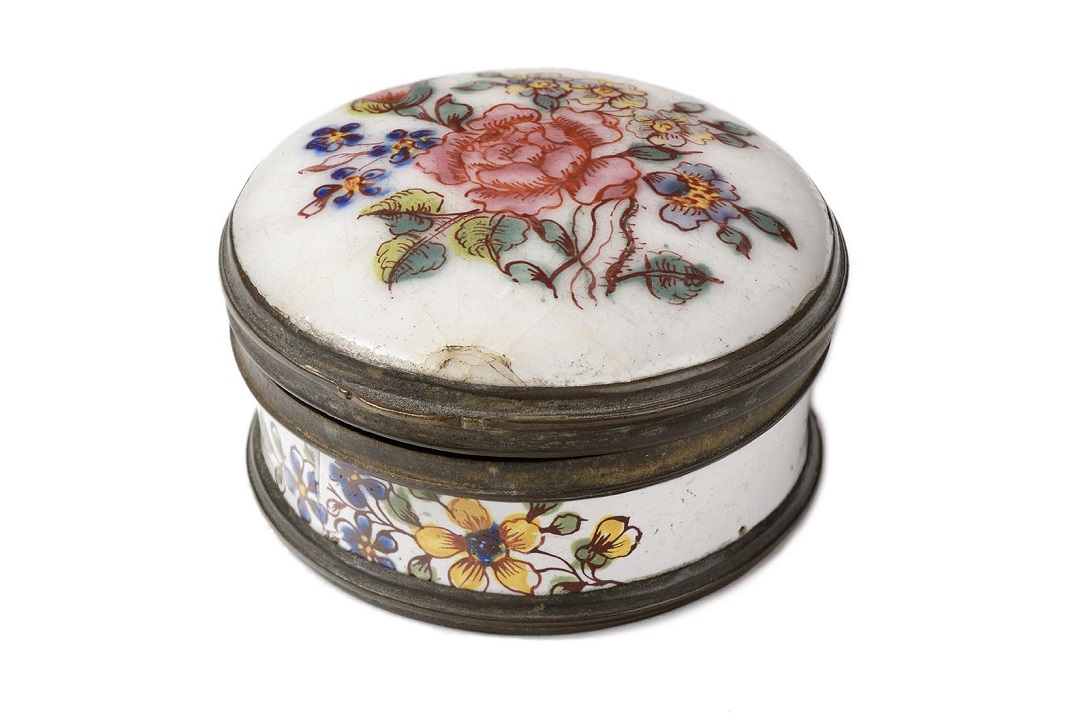 In Colchester’s collection there are a fairly large number of small and tactile delicately painted boxes. Mostly made during the 18th century, these delightful objects are called patch boxes. In this blog post I will explore some of the history behind patch boxes and what the mysterious black patches found inside them were used for.

Patch boxes were sometimes referred to as ‘trinkets’, ‘baubles’ or ‘toys’ and would have been given as gifts to loved ones and friends, or purchased as souvenirs, like this example in the Colchester collection. These little boxes were often purchased from what were referred to at the time as ‘toyshops’. These shops were quite different from our contemporary toy shops and would not be a place to buy gifts for children! Instead, these were places to buy small, often expensive, trinkets. Aside from patch boxes you were likely to find cosmetics and porcelain and glass items such as pill boxes, snuff boxes and scent bottles for sale. Most of patch boxes held in Colchester’s collection are small round, oval or square examples made from porcelain and hand decorated with fine enamels. There were however extremely elaborate (and expensive) patch boxes produced in the 18th century. Some of the finest examples are figural, in the shape of ladies (or gentleman’s!) faces and set with real gemstones.

Patch boxes often had tiny mirrors inside, so that the owner could apply their patches on the go. As can be seen, some of these boxes still contain these tiny patches inside them. But what were these patches used for?

Face patches have been used as a means to cover up scars, blemishes or marks on the skin since antiquity. However, from the 16th century onwards patches became popular again and in the 17th and 18th century they became a fashionable trend adopted by rich and poor alike. Patches were a cheap way for many to tap into fashionable trends.

In the mid 18th century many wealthy women painted their faces as white as they could using whitening creams and face paint called blanc (which could contain toxic ingredients like lead). Small black patches added to the skin provided stark contrast to the white paint and could be used to draw attention to someone’s supposed ‘best’ features. The position of the patches on the face was said to have different meanings, acting as a series of visual codes for others. For example, A patch by the eye meant the person was passionate, whilst one near the lips was considered flirtatious.

Patches could be made from a variety of different materials, although most typically silk taffeta, velvet or paper. They could be stuck to the skin with saliva or more generally mastic or gum arabic. Most patches were a simple round shape, resembling a beauty mark. However, in the mid 18th century when patches were most fashionable, they were made into a variety of shapes including hearts, moons and stars. Most of the patch boxes in Colchester’s collection date to the mid to late 18th century when the trend was at its peak with all classes in Britain. When made, these small boxes would have served a practical purpose, so small they could easily be carried in the owner’s pocket. However, towards the end of the 18th century the fashion for wearing patches dropped off and consequently so did the need for these little decorative pots. Many came to be used as decorative objects, simply used to decorate dressing tables, and eventually made their way into museum collections, appreciated for their decorative beauty.

You can discover more objects in our Patch Boxes collection online.