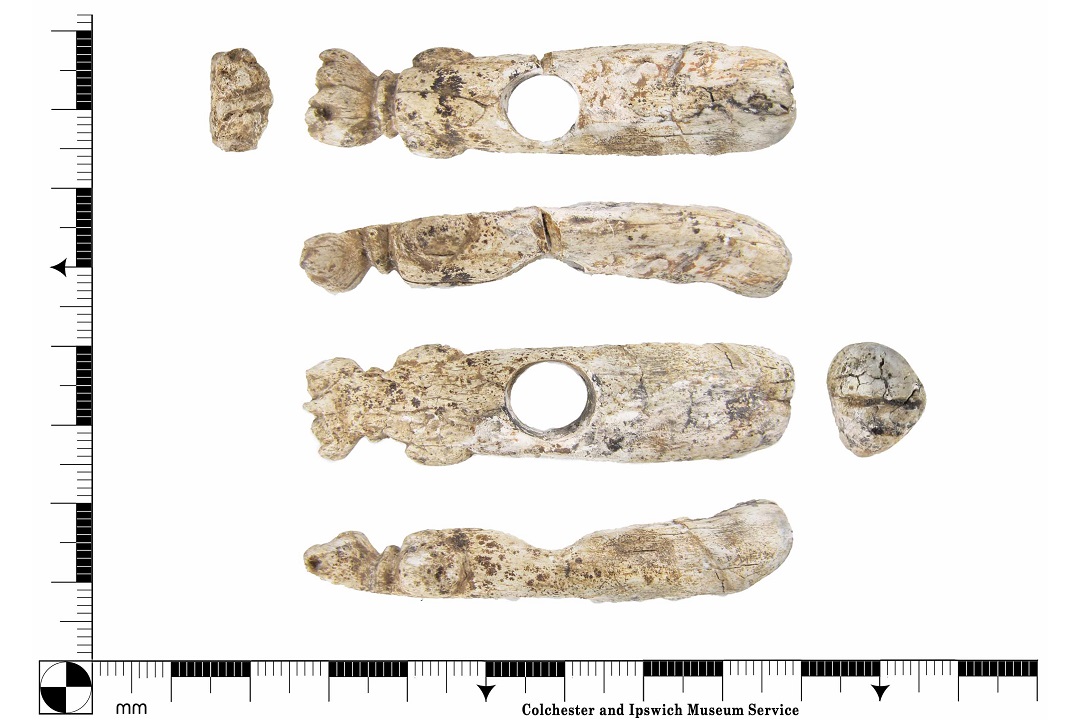 The Camulodunum Case Study by Adam Parker, PhD student at the Open University

The ancient world was a dangerous place where misfortune and bad luck were believed to be caused by external and supernatural forces. The chief source of supernatural danger, the bringer of bad luck and malignant influence, was the Evil Eye. Its gaze could fall on someone because of envy, or because they were in an inauspicious place, like a cross-roads or threshold. Bad things happened and sometimes the Eye could be blamed.

The inhabitants of Roman Colchester sought magical means to protect themselves from these sorts of supernatural forces. I have studied the collections of Colchester Museums as part of my PhD research into the archaeology of magic in Roman Britain. Colchester has one of the largest collections of Roman magical objects to be found in the UK today. In this blog I will introduce three important types of amulets that have been found in the ancient city.

One of the most widely known enemies of the Evil Eye were phalli. Erect phalli, worn as pendants or depicted on finger rings and strap mounts in Roman Britain, were designed to be overtly shocking images – something that the Evil Eye would have to look at. In the 1960, Ralph Merrifield (the father of Roman magic studies in Britain) described them as “lightning conductors for bad luck”; this is the best way to think about how these objects worked. It was believed that by fixing the gaze of the Eye on this sort of amulet, its negative forces could not influence the person, people, or place that it was protecting. Several different shapes of phallic pendant have been found in Roman Colchester. There are six examples of bone objects in which one end is a phallus and the other is formed into a fist (see above and at the top of this post). This fist has the thumb tucked under the forefinger in a gesture called the mano fico (‘fig sign’). It was a rude gesture that was also used to ward against the Evil Eye – it is used as a good luck symbol in it’s own right and is here combined with a phallus for extra supernatural power. Another, flaccid, phallus is present between them. A larger example of a flaccid phallic pendant is known from Colchester (see above). The flaccid pendants are thought to have served a similar sort of protective function, but they are much rarer – there are only nine other pendants of this type in Britain, whereas there are nearly 200 of the erect pendants. There is a very rare type of amulet in Roman Britain, made from Whitby jet, which depicts a bear. The shiny black material is local to Yorkshire but was used all over the province. There are figurines depicting seven bears and two big cats from the whole province. Colchester has the largest collection of the bears to be found anywhere – four of them. The bears are associated with burials of Roman infants and young children. They are  thought of as magical objects because of one of the properties of Whitby Jet – it was electrostatic. By rubbing the figurines, they would take a static charge. In the ancient world this property would have fascinated those who could find it because the attraction of hair or cloth fibres to a small object was an odd thing indeed. The bears are highly polished – probably because they have been rubbed for this reason. Magical gemstones were also very rare in Roman Britain. These are ring-settings (intaglios) which are carved with supernatural figures and include arcane Greek texts alongside them. We don’t always know what they were intended to do, but bestowing power and success on their wearer was a common theme. The above example from Colchester depicts the God Harpocrates in blue lapis lazuli. The seven Greek vowels are written on the back of the object, so if it was set in a finger ring they would be hidden from view. The number ‘7’ was a magical number in the ancient world and it was linked to cosmological concerns – seven Greek vowels, seven days in a week, seven planetary gods etc. The stone itself is probably Egyptian in origin and this type of amulet was particularly popular in Roman Egypt. There are even surviving ancient spell books (The ‘Greek Magical Papyri’) which instruct on the correct magical words and rituals to bring to create a magical gemstone like this.

These are only some of the strategies used by Roman Colchestrians to help protect themselves, their families, and their livelihoods. The range and extent of magical objects surviving from Colchester allows us to think of amulets and magical objects as commonplace. There is nothing to say that someone might not use several amulets together, or specific amulets to protect from specific problems because magical protection was part of the fabric of daily life in the ancient world.

Adam Parker is a PhD student at the Open University. You can read more about his work at: http://romanmagic.wordpress.com

You can also discover other objects with magical associations by exploring our Roman Magic collection online.