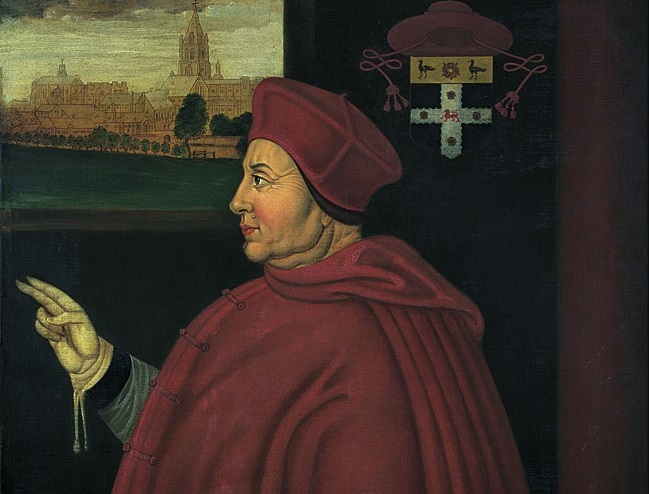 The following is an article written for the Friends of Ipswich Museums newsletter:

An unexpected outcome of the exhibition ‘Thomas Wolsey – Ipswich’s Greatest Son’ has been the opportunity to continue the conversation about Wolsey with Christ Church, the college that he founded in Oxford in 1525. In particular, interest has focused on the painting of Wolsey in the Ipswich collection that I have named the ‘Oxford Portrait’ because a view of Christ Church appears in the background.

This original version of this portrait was painted, long after Wolsey’s death, by a Dutch artist with a most un-Dutch name, Sampson Strong (c. 1550-1611). In 1610 or 1611 Strong was commissioned by the Dean and fellows of Christ Church to paint a portrait of their founder. Today, it still hangs in a prominent position in the hall at Christ Church next to the college’s other benefactor Henry VIII. Wolsey appears in his cardinal’s scarlet robes holding a scroll, perhaps symbolising his interest in learning, and accompanied by his coat of arms. Several of the college buildings in the background of the painting are still recognisable today. I am indebted to Jacqueline Thalmann, the curator at Christ Church for providing further information on the original portrait and an explanation of the likely date of the Ipswich version. Jacqueline explains that the painting is a combination of the college buildings and Wolsey’s portrait. The appearance of the buildings is probably based on a print whilst Wolsey’s portrait could either be taken from a print or one of the smaller, older portraits of the cardinal also at Christ Church. These were produced after his death, when it was acceptable again to have a portrait of Wolsey, and are all very similar, based on a lost prototype in which Wolsey is shown in his cardinal’s red robes, either blessing or holding a scroll. Portraits of this kind were rarely unique objects and, in the age before photography, were placeholders scattered in every place that the sitter felt they had to be represented.  Alternatively, others might feel that they had to show their association with a prominent person and consequently would commission a replica of the ‘official’ image (some of them amusingly bad). At the same time there were always prints in circulation after the official portraits. However, if the person concerned had fallen from power, all memory of him or her would have to be erased, until it became interesting or fashionable again to be associated with that person and then a new round of posthumous portraits would be produced.

Jacqueline goes onto suggest that the Ipswich example of the ’Oxford portrait’ is probably a nineteenth-century copy which would make sense in view of the gradual rehabilitation of Wolsey which began at this time. To many Victorians, Wolsey was both an example of ‘a great man’ and one of the founders of Britain’s imperial destiny as revealed by a closer academic study of his foreign policy. As such he was a worthy subject for a portrait and various places associated with Wolsey wanted his image because it added lustre to their status.

As to how many copies of the ‘Oxford Portrait’ are in existence my curiosity was aroused because of a visit to Southwell Minster in Nottinghamshire. The medieval archbishops of York had a palace at Southwell and it was here that Wolsey lived for four months in the summer of 1530 following his fall from power in the previous autumn. This stay is commemorated by a copy of the ‘Oxford Portrait’ hanging in the State Chamber.

Following this unexpected discovery, I searched for the portrait on the Art UK website and found that as well as Ipswich and Southwell there are also copies at Magdalene College in Oxford, Auckland Castle (co. Durham) and the Bishop’s Palace, Wells (Somerset). Wolsey was a fellow of Magdalen between 1497 and 1502 and held the offices of bishop of Bath and Wells from 1518-23 and bishop of Durham from 1523-29. These copies vary in size; at 49 by 40 cm the Ipswich version is only about half that of the Christchurch original (109 x 92 cm) and supports the theory that it is a latter copy.

As a result of this collaboration with Christ Church it has been possible to add new information to this portrait, which is arguably our single most important item associated with Wolsey.